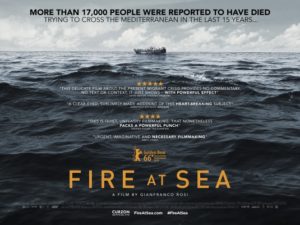 Fire at Sea is the first documentary to ever win the top award at the Berlin International Film Festival. It is the story of a twelve year old boy, Samuele living on an island in the Mediterranean, far away from the mainland. Like all boys of his age, he does not always enjoy going to school. He would much rather climb the rocks by the shore, play with his slingshot or mooch around the port. But his home is not like other islands. For years, it has been the destination of men, women and children trying to make the crossing from Africa in boats that are far too small and decrepit. The island is Lampedusa, which has become ground zero for the flight of refugees to Europe and a symbol of the hope and fate of hundreds of thousands of emigrants fleeing dire living conditions. These people long for peace, freedom and happiness, and yet so often only their dead bodies are pulled out of the water. Thus, every day the inhabitants of Lampedusa are bearing witness to the greatest humanitarian tragedy of our times. With tenderness and a nocturnal grandeur, Director Gianfranco Rosi creates a remarkable narrative that jolts us into a new understanding of what is really happening in the Mediterranean today as well as bear witness to the resiliency at the core of our humanity.

For news and updates go to: kinolorber.com/Fire at Sea

FIRE AT SEA filmmaker Gianfranco Rosi, winner of the Golden Bear at the 2016 Berlin International Film Festival, will participate in Q&A’s after the 7:15 PM screenings at the Fine Arts on Friday and Saturday, October 28 and 29. Laemmle Fine Arts Theatre

Also opening at the Laemmle Playhouse in Pasadena

“A clear-eyed, sublimely made account of a heartbreaking, sometimes gut-wrenching subject. A quietly profound study in contrasts. This isn’t just an apt documentary, but a very fine film”  – Demetrios Matheou, Indiewire

“REMARKABLE. Rosi’s masterstroke is to not approach the hot-button material – of sinking boats, clamouring migrants, bellowing officials – head on, but instead watch it at one remove, through the eyes of the locals on Lampedusa, the Sicilian island that has become a major gateway for the exodus. Rosi’s film is a collection of tiny details that morph, almost by osmosis, into a shocking excavation of the mechanics of crisis.” – Andrew Pulver, The Guardian

“Where journalism leaves off, Fire at Sea begins. It takes a unique documentary filmmaker like Gianfranco Rosi to capture the drama through the periscope of his camera focused on the small Sicilian island of Lampedusa.” -The Hollywood Reporter