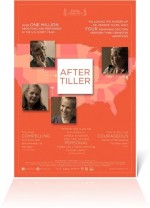 Since the assassination of Dr. George Tiller in Kansas in May 2009, there are only four American doctors left who openly provide third-trimester abortions. After Tiller paints a complex, compassionate portrait of these physicians—Dr. LeRoy Carhart, Dr. Warren Hern, Dr. Susan Robinson and Dr. Shelley Sella—who have become the new number-one targets of the anti-abortion movement, yet continue to risk their lives every day to do work that many believe is murder, but which they believe is profoundly important for their patients’ lives. The film weaves together revealing, in-depth interviews with the doctors with intimate vérité scenes from their lives and inside their clinics, where they counsel and care for their anxious, vulnerable patients at an important crossroads in their lives. By sharing the moving stories of several of these patients, After Tiller illuminates the experiences of women who seek late abortions and the reasons why they do so. Co–director Lana Wilson joins us to talk about the challenges of finding the right balance when tackling such a emotionally charged issue.

“Debuting helmers Martha Shane and Lana Wilson manage a rare feat in After Tiller, making a calm, humanist documentary about a hot-button topic…Well contextualized and sensitively shot with extraordinary access, the pic reflects the personal, moral and ethical struggles of the doctors as well as their patients, and deserves the widest possible audience.” – Variety

“Intimate and heartfelt…Brings an emotional clarity to an issue in which every nuanced turn of phrase has been made politically complicated.” – Los Angeles Times

“One of the most courageous pieces of filmmaking I’ve ever seen. The film takes the issue out of pulpit/talk show screaming-match format and engages viewers hearts and minds, reminding us why we need to make and watch documentary films at all.” – Fandor