COLLISIONS follows the story of a twelve-year-old girl, Itan (Izabella Alvarez), a straight-A- 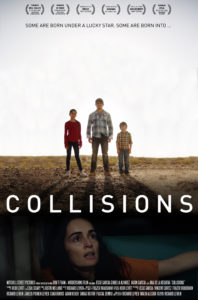 student in San Francisco, who comes home from school to find their family’s furniture up-ended and no trace of her mother, Yoana (Ana de la Reguera), who was detained by Immigration and Custom Enforcement (ICE). Child Protective Services dumps Itan and her six-year-old brother Neto (Jason Garcia) with their estranged uncle Evencio (Jesse Garcia), a big rig truck driver. Itan can’t stand him. He’s arrogant, unreliable, and possibly a criminal. After a desperate search, Itan locates Yoana in an immigration detention center in Arizona and convinces Evencio to take them there. They are propelled onto the road in Evencio’s truck, through the maddening labyrinth of immigration detention. Itan fights to

free her mother before she is deported. But her mother keeps slipping from her grasp, as she is transferred from prison to prison. Their journey takes them through the deserts of the southern border, to sprawling truck stops, border patrol offices and secret immigration prisons. Director / Producer / Writer / Editor Richard Levien joins us for a conversation on the inspiration for COLLISIONS, his desire to humanize the tragic stories behind the headlines and the corrosive impact that cruel, politically motivated policies can have on the lives of hardworking peoples lives.

For news, screenings and updates go to: collisionsmovie.com