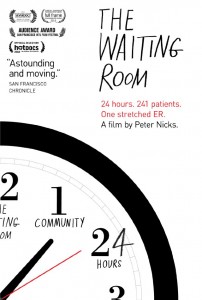 THE WAITING ROOM uses extraordinary access to go behind the doors of an American public hospital struggling to care for a community of largely uninsured patients. The film – using a blend of cinema verité and characters’ voiceover – offers a raw, intimate, and even uplifting look at how patients, staff and caregivers each cope with disease, bureaucracy and hard choices.

The ER waiting room serves as the grounding point for the film, capturing in vivid detail what it means for millions of Americans to live without health insurance. Young victims of gun violence take their turn alongside artists and small business owners who lack insurance. Steel workers, taxi cab drivers and international asylum seekers crowd the halls. The film weaves the stories of several patients – as well as the hospital staff charged with caring for them – as they cope with the complexity of the nation’s public health care system, while weathering the storm of a national recession. Director Peter Nicks will join us for an in-depth conversation about this ground-zero look at our national health care system.

Of all the memorable films on offer at Silverdocs, the most haunting by far is “The Waiting Room,” Peter Nicks’s engrossing cinema verite film set in the emergency room of the Highland Hospital in Oakland, California. - Ann Hornaday, The Washington Post

“The film’s intimate perspective, that of people who have nowhere else to go, brings seemingly intractable political problem to the social level, rendering it a human problem.” - Elien Becque, Center for Health Media and Policy at Hunter College