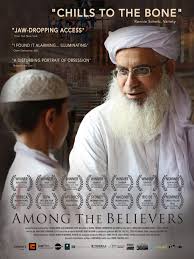 Charismatic cleric Abdul Aziz Ghazi, an ISIS supporter and Taliban ally, is waging jihad against the Pakistani state. His dream is to impose a strict version of Shariah law throughout the country, as a model for the world. A flashpoint in Aziz’s holy war took place in 2007, when the government leveled his flagship mosque to the ground, killing his mother, brother, only son and 150 students. With unprecedented access, Among the Believers follows Aziz on his very personal quest to create an Islamic utopia, during the bloodiest period in Pakistan’s modern history. The film also follows the lives of two teenage students who have attended madrassahs (Islamic seminaries) run by Aziz’s Red Mosque network. Throughout the film, their paths diverge: Talha, 12, detaches from his moderate Muslim family and decides to become a jihadi preacher. Zarina, also 12, escapes her madrassah and joins a regular school. Over the next few years, Zarina’s education is threatened by frequent Taliban attacks on schools like her own. Intimate and shocking, Among the Believers offers rare insights into the ideological battles shaping Pakistan and the Muslim world. The co-directors of Among the Believers, Hemal Trivedi (Producer) and Mohammed Ali Naqvi join us for a conversation on their beautifully balanced film.

For news and updates go to: amongthebelieversfilm.com

“It insists on seeing its subjects’ humanity – something rare in the Western press, particularly when reporting on Islam, and especially fundamentalism.” – Diana Clark, Village Voice

“The filmmakers skillfully orchestrate the various levels of their exploration, from the intimate details of Talha and Zarina’s lives to the workings of the big national picture.” – Ronnie Schieb, Variety

“Hemal Trivedi and Mohammed Ali Naqvi’s Among the Believers takes viewers to the frontlines of an ideological battle playing out in the Islamic world that receives little coverage in the Western media.” Oleg Ivanov, Slant Magazine