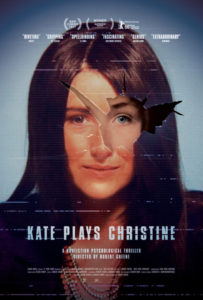 What does it mean to tell somebody else’s story? In this ingenious blend of documentary and psychological thriller, Robert Greene (ACTRESS) follows Kate Lyn Sheil (House of Cards, LISTEN UP PHILIP) through her creative process as she prepares for her next, tragic role: Christine Chubbuck, the Florida newscaster who committed suicide live on-air in 1974. As Kate investigates (and ultimately becomes obsessed with) Chubbuck’s story, she discovers that little is actually known about the real woman (despite the urban myth that her story was the inspiration for the classic Hollywood film NETWORK). Through their collaboration, Robert, Kate and cinematographer Sean Price Williams (HEAVEN KNOWS WHAT) raise questions surrounding the sometimes unstable boundaries between performance, the authentic self and the storytelling impulse. Winner of a Special Jury Prize at the 2016 Sundance Film Festival, KATE PLAYS CHRISTINE is as much about unraveling a mystery as it is a document of the creative process. Director Robert Greene joins us for a conversation on blurring the line between documentaries and narrative films, just what did he learn about Christine Chubbuck’s life  and how has making KATE PLAYS CHRISTINE changed his approach to storytelling.

For news and updates go to: kateplayschristine.com

“Kate’s transformation shifts from merely documenting a process to questioning the motives behind it. The final result is deeply unsettling, and (likely unintentionally) a timely indictment of recent headline-making method-acting histrionics.” – Mallory Andrews, Movie Mezzanine

“ documentary Vertigo, Robert Greene’s re-creation of a woman who fell to her inner demons — something of a ghost story — feels dangerous. It pokes the bear, then slaps it.” – Joshua Rothopf, Time Out

“We are a society of gawkers,” asserts one newsperson as Sheil wrestles with the task at hand. By the end of Kate Plays Christine, Greene seems to argue that we’re all complicit in that indictment.” – Eric Kohn, Indiewire

“A tour de force in the blending and bending of genres.” – Richard Brody, New Yorker