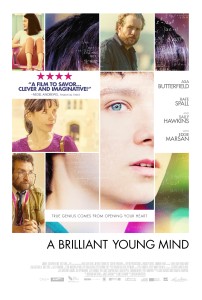 Inspired by true events, A BRILLIANT YOUNG MIND tells the story of teenage math prodigy Nathan (Asa Butterfield), who struggles when it comes to building relationships, not least with his caring mother, Julie (Sally Hawkins). In his confusing world, Nathan finds comfort in the predictability of numbers. And when he’s taken under the wing of an unconventional and anarchic teacher (Rafe Spall), the pair forge an unusual friendship. Eventually, Nathan’s talents win him a place on the U.K.’s National team at the International Mathematics Olympiad (IMO) and the team travels to a training camp in Taiwan, under the supervision of enthusiastic squad leader Richard (Eddie Marsan). Featuring an all-star British cast, A BRILLIANT YOUNG MIND is directed by BAFTA award-winning filmmaker Morgan Matthews and photographed by Oscar-nominated cinematographer Danny Cohen. We are joined by the director Morgan Matthews (Beautiful Young Minds) for a conversation on the inherent advantages of moving from the documentary into narrative filmmaking, balancing multiple storylines and working with a remarkable cast of new and experienced actors.

For news and updates on A Brilliant Young Mind go to: xplusymovie.com

“A Brilliant Young Mind” is not the film you think it is. It’s better.” – Kenneth Turan, LA Times

“At the core of this tender-hearted and moving British indie film is a fascinating relationship between a single mum and her autistic teenage son.” – Dave Calhoun, Time Out

“The sensitive young genius story has been done to death, but apparently there’s still room for the gentle nuance presented in “A Brilliant Young Mind.” – New York Daily News