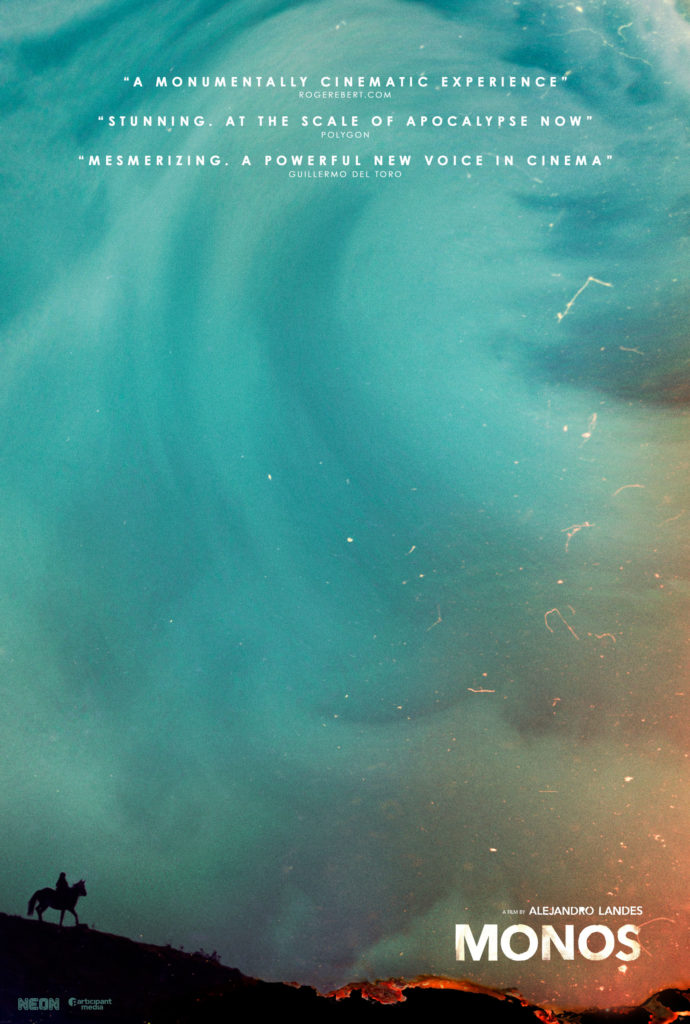 saga set on a remote mountain in Latin America. The film tracks a young group of soldiers and rebels — bearing names like Rambo, Smurf, Bigfoot, Wolf and Boom-Boom — who keep watch over an American hostage, Doctora (Julianne Nicholson). The teenage commandos perform military training exercises by day and indulge in youthful hedonism by night, an unconventional family bound together under a shadowy force known only as The Organization. After an ambush drives the squadron into the jungle, both the mission and the intricate bonds between the group begin to disintegrate. Order descends into chaos and within MONOS the strong begin to prey on the weak in this vivid, cautionary fever- dream. With a rapturous score by Mica Levi (only her third, after UNDER THE SKIN and JACKIE), director Alejandro Landes examines the chaos and absurdity of war from the unique perspective of adolescence, recalling LORD OF THE FLIES and BEAU TRAVAIL in a way that feels wholly original. Landes

brings together a diverse young cast of both seasoned professionals (including Hannah Montana’s Moisés Arias) and untrained neophytes and thrusts them into an unforgiving, irrational and often surreal environment where anything can happen — even peace. Director Alejandro Landes talks about the grueling production challenges of shooting in a jungle, working with a young cast and how his collaboration with screenwriter Alexis Dos Santos and composer Mica Levi helped to create an intense, high-wire cinematic journey.

For news, screenings and updates go to: monos-film.com

“A wild, anarchic film, which rips civilization apart at the seams to examine the messy darkness inside.” – Katie Walsh, Tribune News Service

“Something between Apocalypse Now, Lord of the Flies and Embrace of the Serpent.” – Peter Bradshaw, Guardian

“There’s a bicep-flexing quality to Landes’s direction, with its bursts of colour and chaos, its conjuration of a surreal experience out of tactile reality. You tumble out of it bruised, bewildered, mesmerised.” – Tim Robey, Daily Telegraph (UK)