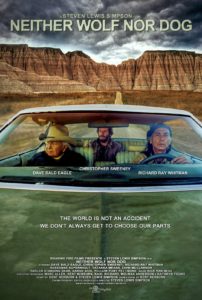 follows a white author who gets sucked into the heart of contemporary Native American life in the sparse lands of the Dakota’s by a 95-year old Lakota elder and his side-kick. NEITHER WOLF NOR DOG takes audiences on a deeply moving road trip through contemporary Lakota life. Its humor is wry and pulls no punches, introducing deep characters and poignant vignettes that challenge the viewer to see the world differently.  Neither Wolf Nor Dog was audience-financed, shot in 18-days in one of the US’s poorest region with an average crew of 2 and a 95-year-old Lakota Elder, David Bald Eagle, as the star. The Lakota actor, soldier, stuntman and musician, David Bald Eagle was left for dead during D-Day and Christopher Sweeney was awarded the Silver Star from the Gulf War. Yet it was the film’s other star, Yuchi-Muscogee Creek multi-disciplinary visual artist, poet, and actor, Richard Ray Whitman, who was never in

the service, who spent the most days under fire during the 71-day occupation of Wounded Knee in 1973. Neither Wolf Nor Dog has become one of the widest released, truly self-distributed movies in years. Simpson flipped the Hollywood model upside-down by launching in small towns and it has the longest theatrical first-run of any movie in at least a decade: 131 weeks so far. Director / Producer / Writer / Editor / Cinematographer Steven Lewis Simpson joins us for a conversation on his determination to pursue own path of independent filmmaking, distribution, marketing and bringing seldom heard stories to a broader audience.

About the filmmaker: At 18 Steven Lewis Simpson was Britain’s youngest fully qualified stockbroker and trader. At 22 he moved to Los Angeles to work for the legendary Roger Corman’s Concorde Pictures. It was there Simpson shot his first feature TIES. He shot his first documentary TIMOR TIMOR in West Timor, Indonesia, produced and co-edited the award-

winning surreal fairy tale, FROG which was broadcast on Canal Plus and associate produced the comedy feature, RESURRECTING BILL. His epic feature documentary A THUNDER-BEING NATION about the Oglala Lakota of Pine Ridge Reservation was released in 2016. Made over 13 years it’s the most comprehensive documentary looking at the history and contemporary life of an Indian Reservation. He capped off the trio of Native American projects with a 13 episode US TV show THE HUB about arts, culture and entertainment within Indian Country. Through this work Steven has become a well-known advocate for Native American rights and a respected figure in Indian Country. Simpson’s latest feature  is an adaptation of the acclaimed Lakota Country novel NEITHER WOLF NOR DOG is being released in 2019. He is currently in post-production on the feature documentary RETURN TO TIMOR, shot in West Timor, Indonesia. For more about the filmmaker go to: stevenlewissimpson.com

For news, screenings and updates go to: neitherwolfnordogfilm.com

“Drifting tantalisingly like a Native American variation on David Lynch’s The Straight Story, this poignant insight into the legacy of centuries of racist brutality reaches a shattering climax at the site of the 1890 massacre at Wounded Knee…” – David Parkinson, Radio Times

“In the wake of Standing Rock, Neither Wolf Nor Dog could not be more current.” – Julie Crawford, North Shore News

“While this effort from filmmaker Steven Lewis Simpson is somewhat lacking in technical polish, it boasts an undeniable emotional power and authenticity.” – Frank Scheck, Hollywood Reporter

“Drifting tantalisingly like a Native American variation on David Lynch’s The Straight Story, this poignant insight into the legacy of centuries of racist brutality reaches a shattering climax at the site of the 1890 massacre at Wounded Knee…” – David Parkinson, Radio Times