The riveting new documentary HOMEMADE bares witness to the lives of Adam Sorensen and his family as they navigate life after combat. The film project was 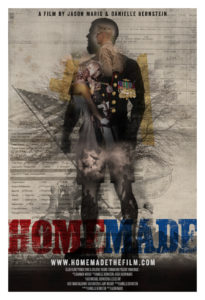 originally developed from the idea that the Improvised Explosive Device (IED) goes off twice; once in the field, affecting each individual differently depending on a variety of factors including proximity to the blast, physical position and past injuries. There is a second blast that goes off in each family living room as a result of the actual explosion. It’s footprint reaches our closest loved ones, the physicians treating the wounded, and extends into our communities. HOMEMADE is a six-year, cinematic and intimate journey about a marriage, invisible wounds and the effects of Post Traumatic Stress (PTS), Traumatic Brain Injury (TBI) and addiction. It is a story of survival and resilience unveiling the scope of these challenges and begging a broader question about our cultural markers of success. Weaving between the monumental landscapes of Utah, Washington DC landmarks, cinéma vérité scenes and recorded phone calls, Through the experiences of

Adam, Victoria, and their families, HOMEMADE examines our cultural markers of success, the culture of treating symptoms instead of cause, and the disconnect between medical care and true wellness. Themes addressed include continuity of care, the epidemic of over-prescription in both military and civilian care, and the stereotypes of injured combat veterans. Co-director / Producer / Editor Danielle Bernstein (Jason Maris) joins us to talk about this heartbreaking film and why Adam and Victoria’s story will close the empathy gap between civilian and military communities, start productive dialogues about the challenge of transition from active duty military to retired, and to provide audiences with an abundance of tools in order to take action.

For news, screenings and updates go to: homemadethefilm.com