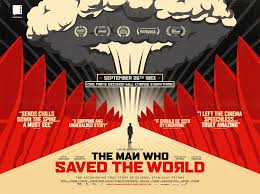 On September 26th, 1983, an alarm sounded to indicate that five American nuclear missiles had been launched against the Soviet Union. Russian Lt. Colonel Stanislav Petrov defied military protocol, ignoring the incoming attack that was being confirmed by all his warning systems. He followed his own sense of responsibility and declared it a false alarm. His decision spared the world a nuclear holocaust. Decades later, this forgotten hero travels to the United States to accept an award from the United Nations and finally receive acknowledgement for his historical act. The Man Who Saved the World becomes a dramatic hybrid documentary; a historical thriller, and a story of great, personal redemption. It seamlessly melds together non-fiction and narrative filmmaking depicting the actual events that took place more than thirty years ago. Stanislav Petrov reminds us how close the world came to World War III – but, he also challenges us to contemplate the true alternative to his choice: The complete annihilation of human life on earth. Featuring Kevin Costner with appearances by Walter Cronkite, Robert De Niro, Matt Damon, and Ashton Kutcher. Director / writer Peter Anthony joins us to talk about a man and an event that has been virtually unknown to the world outside a small circle of people who have long understood the impact Stanislav Petrov’s actions had on the fate of the world.

For news and updates go to: themanwhosavedtheworldmovie.com

The Man Who Saved the World screens at the Arena Theatre starting Friday, September 25.

“I was just at the right place at the right time,” Mr. Petrov says, a simple truth that becomes shocking when considering the alternative. For that alone, this account of a Cold War near miss deserves a wide audience.” – Daniel Gold, New York Times

“The Man Who Saved The World…combines elements of narrative and documentary filmmaking for a true and powerful story about (and starring, as himself) Stanislov Petrov, who actually averted a nuclear holocaust but remained unknown, until now.” – Mitch Myers, The Hollywood Reporter

“I often get the chance to play heroes. But Stanislav is a true real-life hero.” – Kevin Costner