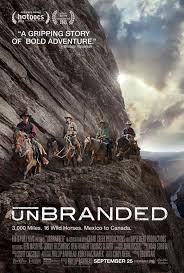 UNBRANDED reveals the true interdependence of man, animal and nature — their 3000-mile gauntlet through five states that is indescribable and unforgiving. Sixteen mustangs, four men, one dream: to ride border to border, Mexico to Canada, up the spine of the American West. The documentary, UNBRANDED, tracks four fresh-out-of-college buddies as they take on wild mustangs to be their trusted mounts, and set out on the adventure of a lifetime. Their wildness of spirit, in both man and horse, is quickly dwarfed by the wilderness they must navigate: a 3000-mile gauntlet through five states that is equally indescribable and unforgiving. This story of rugged independence reveals the true interdependence of man, animal and nature. As we see first-hand, Ben Masters, Jonny Fitzsimons, Thomas Glover and Ben Thamer, relied upon the incredible strength and energy of mustangs – these wild horses – who had been chosen and trained for this purpose. The group set out to inspire adoptions of the 50,000 wild horses living in holding pens in the American West and to bring attention to the fragile ecosystem and this last uninterrupted vertical stretch of public land in the West. Along the way, the support they receive from others, including a veteran horseman and cowboy poet whose life has been deeply connected to horses and the backcountry, creates a meaningful bond among the men and the animals. Director and co-cinematographer Phillip Baribeau stops by to talk about his visually stunning, emotionally charged plea for the lives of thousands of wild mustangs currently held in stifling captivity.

For news and updates on Unbranded go to: unbrandedthefilm.com

“Unbranded is a cross between The Hangover, The Horse Whisperer and a great National Geographic nature doc, which is a combination you’ll rarely get to see.”  – Tom Roston, POV Blog