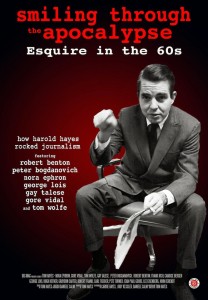 Smiling Through The Apocalypse: Esquire in the Sixties is the story of maverick editor Harold Hayes, who, from 1963-1973, made  Esquire  magazine a galvanizing force in American culture, and the voice of a turbulent era that brought sweeping social and political changes to the nation.   He encouraged unprecedented journalistic freedom, nurturing the most talented artists and writers of the time including Tom Wolfe, Gay Talese, Nora Ephron, Peter Bogdanovich, Gore Vidal, Diane Arbus, Norman Mailer, and George Lois.  In this sea change, Hayes was the chief architect. Stressed by long lead times against a turbo charged culture, Hayes overcame hindrance through audacity and innovation, bringing together a unique group of writers in the golden age of magazine journalism. Forging its pop-cultural capital with provocative covers and journalism, Esquire became the social curator and reflection of the American zeitgeist. Director and son of Harold Hayes, Tom Hayes joins us to talk about his 5-year personal journey to better understand the impact and ingenuity of a father who became a driving force in the transformation of contemporary American culture.

For news and updates on Smiling Through the Apocalyse go to: smilingthroughtheapocalypse.com

“This film should not be missed, especially by those interested in the publishing world and its immense potential for intellectual sophistication” – Roxana Vosough, Mode Moderne Journal

“Skillfully edited and energetically paced, Smiling Through provides a memorable time capsule for those who miss the smart magazines that will never return.” – Stephen Farber, The Hollywood Reporter

“The film mounts a compelling case on behalf of what was, perhaps, a sort of genius – a rare gift for identifying talent in others and nurturing it, even amplifying it” – Calum Marsh, Village Voice