BECOMING NOBODY represents the core arc of Ram Dass’ teachings and life: 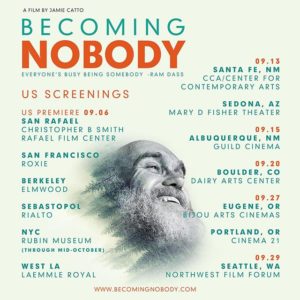 whether as Dr. Richard Alpert, the eminent Harvard psychologist, or as Ram Dass who serves as a bridge between Eastern and Western philosophies, he has defined a generation of inner explorers and seekers of truth and wisdom. Through his turns as scion of an eminent Jewish family from Boston, rock-star Harvard psychologist, counter-culture rascally adventurer, Eastern holy man, stroke survivor and compassionate caregiver, Ram Dass has worn many hats on his journey, the narrative of which is revealed in this film. His ability to entertain and his sense of humor are abundantly evident in a conversation that brings us around to address the vast question of ultimate freedom. In BECOMING NOBODY, historic clips balance an engaging conversation with director Jamie Catto. We come to understand how our old roles and disguises become increasingly burdensome. The film captures a loving man full of joy, wit, honesty and wisdom, at ease in conversation while sharing his considerable pains and pleasures. The life experiences that have freed him from the attachments of his ‘somebody-ness’ have transformed him into the radiant soul who now inspires a new generation. Producer Raghu Markus joins us to talk about the life and times of Ram Dass, his transformation from Richard Alpert and what it means to love, serve, remember.

About the Producer – Raghu Markus: Raghu Markus spent two years in India with Maharaj-ji and Ram Dass. He has been involved in music and transformational media since the early 1970s when he was program director of

CKGM-FM in Montreal. In 1974 he collaborated with Ram Dass on the box set Love Serve Remember. In 1990, he launched Triloka Records and Karuna Music in Los Angeles, California. Triloka established itself as a critical leader in the development of world music and for 17 years was home to such artists as Krishna Das, Hugh Masekela, Walela, and Jai Uttal. He produced transformational media projects that featured Ram Dass, Deepak Chopra and Les Nubians. He is the executive Director of the Love Serve Remember Foundation. In 2016, he co-founded the Be Here Now Podcast Network and hosts Here & Now with Ram Dass as well as his own Mindrolling podcast.

For news, screenings and updates go to: becomingnobody.com

The documentary will open at the Rubin Museum in New York, at the Laemmle Royal in Los Angeles, as well as theaters in Bay Area, on September 6. A national release will follow.