Linda Ronstadt: The Sound of My Voice is a love song to one of the most 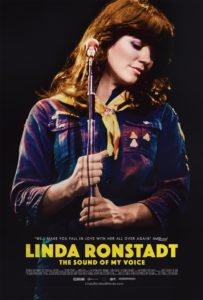 memorably stunning voices that has ever hit the airwaves, Linda Ronstadt. She burst onto the 1960s folk rock music scene in her early twenties as the lead singer of the Stone Poneys, Ronstadt eventually branched out to begin her decades long career as a solo artist, touring the world selling out stadiums and, at one point, setting the record as the highest paid female artist in rock. Most remarkable to this day is her interest in and willingness to jump into new and challenging styles of music, including opera, jazz, and Mexican folk, excelling fantastically with each. Ronstadt has also been an outspoken political advocate for causes such as same-sex marriage and the inhumane treatment of undocumented immigrants, never shying away

from fighting for what she believes both on and off the stage. Oscar-winning directors Rob Epstein and Jeffrey Friedman (The Times of Harvey Milk, The Celluloid Closet, Common Threads: Stories from the Quilt, Howl, Lovelace and End Game) use deep-cut archival footage, and Ronstadt’s own astute recollections, to celebrate an artist whose desire to do justice to the songs that touched her soul made generations of fans fall in love with her – and with the sound of her voice. Co-directors Rob Epstein and Jeffrey Friedman join us to talk about a remarkable singer /artist and an even better person.

For news, screenings and updates go to: lindaronstadtmovie.com

For more on the films of Rob Epstein and Jeffrey Friedman go to: tellingpictures.com

“She shows herself to be one of its indispensable interpreters, as a vocalist and also as a thinker – covering a sprawling landscape with elegance, passion and insight.” – A.O. Scott, New York Times

“It captures the life and career of a rock ‘n’ roll star who never looked back, never apologized, never compromised.” – Owen Gleiberman, Variety

“Astutely chronicling an amazing musical career that ended prematurely due to Parkinson’s disease, Linda Ronstadt: The Sound of My Voice will delight the singer’s old fans and likely make her many new ones as well.” – Frank Scheck, Hollywood Reporter