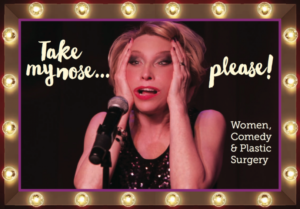 TAKE MY NOSE PLEASE is a seriously funny and wickedly subversive look at the role comedy has played in exposing the pressures on women to be attractive and society’s desire/shame relationship with plastic surgery. More than 15 million cosmetic procedures were performed in the US in 2014.  And 90% of them on were done on women. Yet, for those who elect to tinker with Mother Nature, especially for high-profile women, plastic surgery is still a very dark secret.  Funny women, though, are the exception.  From Phyllis Diller and Joan Rivers to Roseanne Barr and Kathy Griffin, comedians have been unashamed to talk about their perceived flaws, and the steps taken to remedy them. TAKE MY NOSE PLEASE follows two comedians as they deliberate about going under the knife. Emily Askin, an up-and coming improv performer, has always wanted her nose refined. Jackie Hoffman, a seasoned headliner on Broadway and on TV, considers herself ugly and regrets not having the nose job offered in her teens. And maybe she’d like a face-lift, as well. As we follow their surprisingly emotional stories, we meet other who have taken the leap – or held out. Putting it all in perspective are psychologists, sociologists, the medical community and cultural critics. And for comic relief and the profundity only comedians can supply.  The film includes commentary from Roseanne Barr, Phyllis Diller, the late Joan Rivers,Judy Gold, Julie Halston, Lisa Lampanelli, Giulia Rozzi, Bill Scheft, and Adrianne Tolsch. Director Joan Kroc joins us to talk her engaging. lively, funny and enlightening debut film.

For news and updates go to: takemynoseplease.com