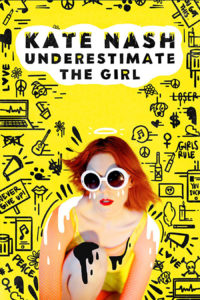 THE GIRL, chronicles the meteoric rise and years-long struggle of musician / artist Kate Nash to re-establish a thriving career on her own terms. At 18, Nash reached the stratosphere of pop music, vaulting from a working-class family in North London into worldwide tours, a platinum record, and a season dominating the music charts. Fast forward to ten years later: Kate is breaking down, nearly homeless. Defrauded by her manager, she is forced to take odd jobs–like hosting a QVC show in a comic bookstore–and must sell off her clothes. After hitting bottom, she rises out of the darkness by crowd-funding her third album, using the uplifting power of online culture and her own authentic voice. From pop wonder, to riot grrrl, to TV wrestling queen, Kate’s journey is an inspiring call to the creative heart in all of us: be fearless. Blending performance footage with verité style sequences, KATE NASH: UNDERESTIMATE THE GIRLis both a no-punches-pulled look at an artist in flux who manages to come out on top, and at an industry that proves its own gender bias at every opportunity. The film is structured around songs and lyrics, as they are written and performed by Kate Nash, to tell its unfolding story. Director Amy Goldstein joins us to talk about Kate Nash, her work ethic, determination, sense of humor and how that has served her over the many years of struggle.

For news and updates go to: thehoopinglife.com/kate-nash-underestimate-the-girl

KATE NASH: UNDERESTIMATE THE GIRL will be released nationally on Friday May 22 via the groundbreaking virtual cinema platform ALAMO ON DEMAND. Following the Saturday, May 23 6:00 PST / 9:00 EST there will be an interactive performance and Q&A with Kate Nash.The exclusive release will then hit a limited traditional theatrical rollout in August. Watch tonight: On Demand.drafthouse.com/film/kate-nash-underestimate-the-girl

About the filmmaker: Amy Goldstein, Director/Producer/Cinematographer Amy Goldstein graduated from Hampshire College with a BA in semiotics and from NYU Film School. She was a Louis B. Mayer fellow at NYU film school. Her short, “Commercial for Murder” (1990), screened at the Berlin Film Festival and was distributed theatrically in a collection of shorts. Her thesis film, Because the Dawn, 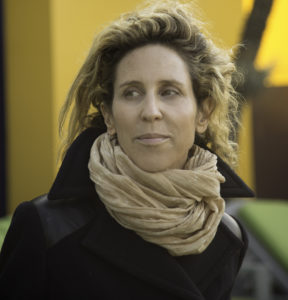 was presented as the American Independents at the Toronto Film Festival with Todd Haynes‘ Superstar: The Karen Carpenter Story. After school, Amy directed music videos for artists from around the world, including Rod Stewart‘s “Downtown Train”. She directed the feature film The Silencer, which she co-wrote with Scott Kraft, and they went on to develop pilots for HBO, CBS, Fox, Showtime, and MTV, and the hip-hop musical Check Under the Hood for Jersey Films/Polygram. She directed the award-winning feature film East of A, an edgy comedy about an alternative family facing the challenges of raising a child with HIV. Amy directed “The Hooping Life” (1999), a chronicle of a worldwide subculture of “hoopers” who transcend their personal toil and the world’s fears through hula-hooping. Her most recent project is the documentary about the career of pop star Kate Nash, Kate Nash: Underestimate the Girl. Amy Goldstein and Anouchka van Riel, Producer head up Span Productions

“What emerges is a comprehensive, thoroughly engaging portrait of a woman who has made it on her own terms and is back for more.” – Christopher Llewellyn Reed, Hammer to Nail

“If you want a reminder that misogyny is alive and well, this is the documentary for you. It actually ends on a bright note, but the road there is brutal” – Lindsay Pugh, Woman in Revolt

“While not quite as saddening as the recent Avicii documentary, Kate Nash: Underestimate the Girl is another indictment of the music business and its tendency to chew up young talent.” – Suzi Feay, Financial Times