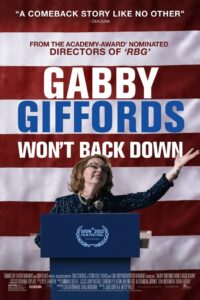 GIFFORDS WON’T BACK DOWN tells the extraordinary story of former Arizona Congresswoman Gabby Giffords, her

relentless fight to recover following an assassination attempt in 2011, and her new life as one of the most effective activists in the battle for gun violence prevention and in promoting understanding of the language condition aphasia. Featuring extensive verité filming of Gabby and her husband, astronaut-turned-Senator Mark Kelly; interviews with President Barack Obama

and other friends and colleagues; and exclusive access to stunning videos taken in the weeks following her near-death experience, this film is the story of a rising star transformed by an act of violence, and a close-up portrait of the marriage that sustains her.  Co-directors Julie Cohen and Betsy West join us for a conversation on the indomitable spirit of a bright young woman who refuses to give up, the nexus of gun violence and American politics and their own commitment to using their journalism background to create compelling portraits of extraordinary people.

For screenings and updates go to: briarcliffentertainment.com

About the filmmaker – Director and Producer Betsy West is a filmmaker, journalist and professor. She co-directed RBG (Magnolia, Participant, CNN Films 2018,) which premiered at the Sundance Film Festival. She is a 21-time Emmy Award winner for her work as an ABC News producer and EP of the documentary series Turning Point. As Vice President at CBS News from 1998 to 2005, she oversaw 60 Minutes and 48 Hours. She was executive producer of the MAKERS (AOL & PBS) documentary and digital series, the documentary The Lavender Scare, and the short doc The 4%: Film’s Gender Problem (Epix). She is the Fred W. Friendly professor at Columbia Journalism School.  Find out more at: storyville.org

About the filmmaker – Director and Producer Julie Cohen has directed and produced nine feature documentaries, including RBG (Magnolia, Participant, CNN Films), The Sturgeon Queens (7th Art Releasing/PBS); and American Veteran (Freestyle). She has won a duPont Columbia Award, two Gracie Awards, three New York Emmy Awards and the 2017 Panavision Showcase Award for best New York filmmaker. Before she started making documentaries, Julie was a staff producer for Dateline NBC and the creator and producer of Supreme Court Watch on Court TV. She holds a B.A. from Colgate and master’s degrees from Columbia Journalism School and Yale Law School. Find out more at: storyville.org

“It takes a first-rate intelligence to hold two opposing ideas in mind at the same time, as F. Scott Fitzgerald wrote. In a film that suggests what might have been and what is, Giffords proves first-rate.” – Lisa Kennedy, Variety

“A truly inspirational offering an almost verite kind of fly-on-the-wall account of what can only be termed as a comeback story like no other.” – Pete Hammond, Deadline Hollywood Daily

“This film represents more than a politician’s success story: it embodies grief, dignity, and above all, love.” – Dina Barrish, Austin Chronicle