Where his prior film, the acclaimed epic AQUARELA, was a reminder of the 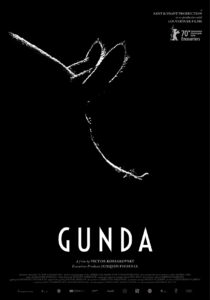 fragility of human tenure on earth, in GUNDA, master filmmaker Viktor Kossakovsky reminds us that we share our planet with billions of other animals. Through encounters with a mother sow (the eponymous Gunda), two ingenious cows, and a scene-stealing, one-legged chicken, Kossakovsky movingly recalibrates our moral universe, reminding us of the inherent value of life and the mystery of all animal consciousness, including our own.  Experiential cinema in its purest form,

GUNDA chronicles the unfiltered lives of a mother pig, a flock of chickens, and a herd of cows with masterful intimacy. Using stark, transcendent black and white cinematography and the farm’s ambient soundtrack, Master director Victor

Kossakowsky invites the audience to slow down and experience life as his subjects do, taking in their world with a magical patience and an other worldly perspective. GUNDA asks us to meditate on the mystery of animal consciousness, and reckon with the role humanity plays in it.

For news and updates go to: gunda.movie

“GUNDA is a mesmerizing perspective on sentience within animal species, normally – and perhaps purposely – hidden from our view. Displays of pride and reverence, amusement and bliss at a pig’s inquisitive young; her panic, despair and utter defeat in the face of cruel trickery, are validations of just how similarly all species react and cope with events in our respective lives. Victor Kossakovsky has crafted a visceral meditation on existence that transcends the normal barriers that separate species. It is a film of profound importance and artistry.” – Executive producer Joaquin Phoenix

Director’s Statement – Growing up I was very much a city kid, but at the age of four I spent a few months in a village in the countryside, where I met my best friend Vasya. He was much younger than me – just a few weeks old when we met – but over time he became my dearest friend and the times we spent together are some of the most cherished memories from my childhood. One day, when we were still young, Vasya was killed and served as pork cutlets for a New Year’s Eve dinner. I was devastated and immediately became (probably) the first vegetarian kid in the Soviet Union. As a consequence, since I became a filmmaker I have always wanted to make a film about the creatures with whom we share the earth, a film about animals as living, feeling beings in their own right. I wanted to make a film without patronizing or humanizing them, without any sentimentality, and without vegan propaganda. However, as the film I had in mind is not about dolphins, elephants, pandas or other cute animals we love to love, it was impossible to finance. I tried for almost three decades until I finally met Norwegian producer Anita Rehoff Larsen from Sant & Usant who took the risk on making it. We were unbelievably lucky to meet Gunda in the Norwegian countryside on the very first day of our research trip. Gunda is on the screen for over half of the runtime of the final film and is an extraordinarily powerful character – you do not need an interpreter to understand her emotions and experiences. As such I decided to make this film without any captions, voice-over, or music, you just need to watch it and allow yourself to feel. For me, the essence of cinema is showing, not telling. I do not make films if I want to tell an audience something I have no interest in prescribing an opinion. I make films if there is something I want people to see and to allow them to find their own conclusion. Documentary cinema is a great tool to show the realities of the world, to show things that we do not see by ourselves, that we do not want to see, or that we have collectively agreed that we do not see, and so we allow ourselves not to think about. With GUNDA I want people to see these animals as sentient beings and to encourage them to think about the possibility of their consciousness and selfhood. With that I feel that GUNDA is the most personal and important film I have made as a filmmaker and as a human being. – Victor Kossakovsky

TOP 10 FILM OF THE YEAR – The New York Times

“GUNDA is pure cinema. This is a film to take a bath in – it’s stripped to its essential elements, without any interference. It’s what we should all aspire to as filmmakers and audiences – pictures and sound put together to tell a powerful and profound story without rush. It’s jaw dropping images and sound put together with the best ensemble cast and you have something more like a potion than a movie.” – Paul Thomas Anderson

“Sublimely beautiful and profoundly moving, it offers you the opportunity to look – at animals, yes, but also at qualities that are often subordinated in narratively driven movies, at textures, shapes and light.” – Manohla Dargis, New York Times

“”Gunda” may be a meditational slow-burn, but as it unfurls its immersive audiovisual tapestry it hovers between non-fiction observation and lyrical insight, and to that end feels like an advancement of the nature documentary form.” – Eric Kohn, indieWire

“It is hard to fully articulate how, but Gunda is as much a damning meditation on the human condition as it is a glowing, thought-provoking portrayal of a mother’s love for her children, a sow’s love for her piglets.” – Matthew Anderson, CineVue