HARRIET TUBMAN: VISIONS OF FREEDOM is a rich and nuanced portrait 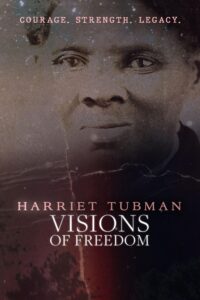 of the woman known as a conductor of the Underground Railroad, who repeatedly risked her own life and freedom to liberate others from slavery. Born in Dorchester County, Maryland, 200 years ago — 2022 marks her bicentennial —Tubman escaped north to Philadelphia in 1849, covering more than 100 miles alone. Once there, Tubman became involved in the abolitionist movement, and through the Underground Railroad guided more than 70 enslaved people to freedom.

Going beyond this well-known aspect of Tubman’s life, the doc will also recount her later exploits as a Union scout and spy during the Civil War, a leading abolitionist,

and a women’s suffrage activist, as well as delving into the psychological and spiritual motivations that drove her to her extraordinary accomplishments. HARRIET TUBMAN: VISIONS OF FREEDOM goes beyond the legend of Tubman to explore what motivated her — including divine inspiration — to become one of the greatest freedom fighters in our nation’s history.  HARRIET TUBMAN: VISIONS OF FREEDOM is narrated by Emmy® award-winning actor Alfre Woodard.

For more go to: harriettubmanvisionsoffreedom.org

Director’s Statement – With this film, our aim was to go beyond what is covered in history books to create a real, three-dimensional portrait of who Harriet Tubman actually was. We wanted to examine what motivated her to pursue a revolutionary and often dangerous journey, particularly through her fierce religiosity and metaphysical connection to the divine. This film also has such a distinct sonic layer thanks to powerful narration by the great Alfre Woodard. – Stanley Nelson

About the filmmaker – Nicole London is an Emmy-winning and Grammy-nominated producer/director who began her career in public affairs before working as an associate producer for PBS’s To the Contrary.  She eventually focused on the long story format of documentaries as her way to impact the public conversation about Black and women’s histories. She has worked on several projects with top directors in documentary film, including American Masters’ Marvin Gaye: What’s Going On; Sammy Davis, Jr.: I’ve Gotta Be Me; POV’s American Promise; and Independent Lens’ The Black Panthers: Vanguard of the Revolution, which was nominated for a 2016 Exceptional Merit In Documentary Filmmaking Emmy. London was also the producer for Miles Davis: Birth of the Cool, for which she was nominated for a 2020 Grammy for Best Music Film and won the 2021 News & Documentary Emmy for Outstanding Arts and Culture Documentary. In 2021, she was honored as a Trailblazer at the 22nd Annual African American Women In Cinema Film Festival. She is currently working on a new American Masters documentary on Black pianist Hazel Scott (1920-1981). Earlier this year, I served as the guest editor of theHarriet Tubman Bicentennial Project, which launched Feb. 1. London and I recently chatted about Tubman’s heroism and entrepreneurial spirit, and what it was like to reckon with her legacy.