In the mid-‘70s, filmmaker James Szalapski traveled to Texas and Tennessee to capture the radical country artists reclaiming the genre through an 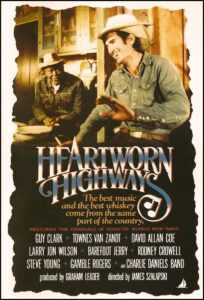 appreciation for its heritage in folk and bluegrass and a rejection of the mainstream Nashville machine. The hard living – and hard partying – lifestyles of outlaw country’s figureheads are played out on screen in trailer homes, prisons and even a liquor-fueled Christmas gathering. It borrowed from rock, folk and bluegrass, with an edge that was missing from mainstream Nashville country. This newly-restored document, HEARTWORN HIGHWAY, includes rarely-captured performances of musicians as they perfected this then-new style and helped change the course of country music history by artists that include Townes Van Zandt, Guy Clark, Rodney Crowell, Steve Young, David Allan Coe, and a 19-year-old Steve Earle and many others appear and perform. Musical highlights include Clark’s brilliant “Desperados Waiting For A Train”, 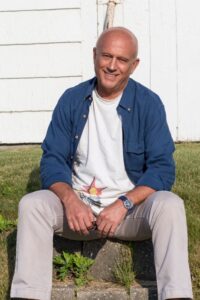 Wam Tavern and witness a liquor-fueled Christmas at Clark’s house. No wonder the film’s original tagline read: “The best music and the best whiskey come from the same part of the country”. Outside of a couple festival screenings, the movie remained unreleased for five years after its completion, finally hitting screens in 1981 and finding a cult audience ever since.” Heartworn Highways Producer Graham Leader joins us to talk about the groundbreaking artists he and director / writer / cinematographer  James Szalapski were able to wrangle into participating as well as the long and winding road this fabled film has taken over the last 44 years.

For news and updates go to: kinolorber.com/film/heartworn-highways

For more about the films of Graham Leader go to: sealionfilms.com

About the filmmaker – Graham Leader grew up in England, studied art history at the Victoria & Albert Museum and worked as a dealer in twentieth century art before becoming a producer. Founded by Leader in 2014, SEALIONFILMS is currently developing a broad slate of character-driven scripts and documentary projects aimed at the international market. His films include: HEARTWORN HIGHWAYS (1976), SHUTTLECOCK (1990), IN THE BEDROOM (1991), THE SAFFRON LIMITED (2005), CHILDLESS (2008), HEARTWORN HIGHWAYS REVISITED (2012 – 2014), and SINS OF A FATHER (2014).

About the music – “Musically, it’s almost impossible to pick highlights but Guy Clark’s “That Old Time Feeling” is a husky delight and when Seymour Washington, a friend of Van Zandt’s (born 1896!) hears him sing “Waitin’ ‘Round To Die” he can’t prevent teardrops from rolling down his cheeks; neither will you.” – Record Collector

“The only thing flawed about “Heartworn Highways” is the people, and they’re so likable you’ll quickly look past their less desirable qualities or notions.” – Michael J. Casey, Michael J. Cinema

“Heartworn Highways refuses that historicizing assessment, even resists it. The film would certainly not have become the canonical documentary it has without the subsequent success of its subjects, but their names are never the emphasis here.” – Doug Freeman, Austin Chronicle

“Shot in 1975 but not released until 1981, this documentary by James Szalapski captures the nascent stages of a poetic country music played by Texas outsiders like Guy Clark, Steve Young, Townes Van Zandt, and a young Steve Earle.” – Peter Margasak, Chicago Reader