With his trumpet he turned the Tijuana Brass into gold, earning 15 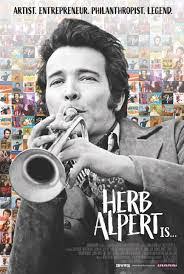 gold and 14 platinum records; He has won nine Grammys Awards between 1966 and 2014, and received the National Medal of Arts from President Barack Obama in 2012. Herb co-founded the indie label, A & M Records with his business partner, Jerry Moss, which recorded artists as varied as Carole King, Cat Stevens, The Carpenters, Janet Jackson, Peter Frampton, Joe Cocker, Quincy Jones, Sergio Mendes, and The Police. A&M would go on to become one of the most successful independent labels in history. He has shown his striking work as an abstract painter and sculptor, worldwide. And through the Herb Alpert Foundation, he has given significant philanthropic support of

educational programs in the arts nationwide, from the Harlem School of the Arts and Los Angeles City College to CalArts and UCLA. John Scheinfeld’s documentary Herb Alpert is… profiles the artist, now 85, mostly from the perspective of colleagues like Questlove, Paul Williams, Sting, and Bill Moyers. In their words, the shy, unassuming trumpeter is a musical, artistic and philanthropic heavyweight. Director John Scheinfeld stops by to talk about many facets of Alpert’s personal and public life that make him the compelling and warm-hearted person he is.

For news, screenings and updates go to: herbalpertis.com

For more on the work and latest news go to: herbalpert.com

About the filmmaker – John Scheinfeld – From pop culture to politics, sports to world religions, Venice and Toronto film festivals to PBS, Emmy®, Grammy® and Writers Guild Award nominee John Scheinfeld is a critically acclaimed documentary filmmaker with a broad range of subjects and productions to his credit. In addition to directing, writing and producing Herb Alpert Is…, Scheinfeld is in post-production on a primetime documentary special about comedy legend Garry Marshall that will air on ABC in the Spring of 2020. Another Scheinfeld feature documentary, Sergio Mendes: In The Key of Joy, had its World Premiere at the Santa Barbara International Film Festival in January 2020 and will be released worldwide on multiple media platforms later in the year. Previously, his feature documentary, Chasing Trane: The John Coltrane Documentary, was an official selection of the Telluride Film Festival and the Toronto International Film Festival before playing on 175 theater screens worldwide during the spring of 2017. In November 2017 it was the season premiere of Independent Lens, the largest showcase for independent documentary film on television. Scheinfeld is best known for two widely acclaimed feature documentaries: The U.S. vs. John Lennon, which tells the true story of the US government’s attempt to silence the beloved musician and iconic advocate for peace and Who Is Harry Nilsson (And Why Is Everybody Talkin’ About Him)?, a compelling yet wildly entertaining documentary about one of the most talented and uncompromising singer-songwriters in pop music history. For more on the work of John Scheinfeld go to: crewneckproductions.com

“The story of Herb Alpert is a lot more than a snappy greatest hits collection; it’s a deep dive into the agonies and ecstasies that drive profoundly creative people.” – Bill Newcott, The Saturday Evening Post

“This movie will likely go down as the definitive documentary about Alpert and, as such, it’s not a bad way to be remembered.” – James Berardinelli, ReelViews

“This documentary is a joyous celebration of Herb Alpert’s life and career as it examines his roots not only as a musician but as a painter, sculptor, businessman and philanthropist.” – Charles Koplinski, Reel Talk with Chuck and Pam

“You’ll probably come away from Herb Alpert Is… not only admiring the man but wishing you were him.” – Frank Scheck, Hollywood Reporter