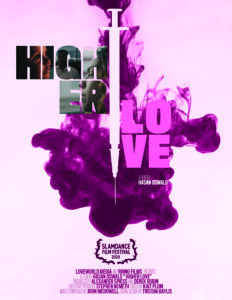 at addiction, poverty, love, and broken promises through the life Daryl Gant a Camden, New Jersey native, father of eight, and printing press operator. Daryl was raised by a single mother and strives to be a better father than his own, who abandoned him at birth. His girlfriend, Nani, is the love of his life but her crippling crack and heroin addiction, is destroying any hope of a sustainable relationship. Nani finds herself pregnant with their new baby boy, Darnez. The pregnancy becomes Daryl’s new-found purpose to forge a better future for the both of them. Despite Nani’s struggles Darnez os born healthy, but in need of specialized care. Their friend, Iman, was once a drug dealing kingpin in

Camden in the 1990s. He was also a father and a mechanical engineer until he caught a dealer’s habit selling dope. He embodies the spirit of many disaffected residents of Camden, taking the viewer on a tour of post-industrial American decay. His own quest to

sobriety will eventually force the hand of Nani to make a change, as they forge parallel paths to recovery. Director Hasan Oswald joins us for a conversation on how immersing himself into the shattering reality of opioid users affected him and how much does poverty and the lack of economic opportunity impact the people on the business end of a needle.

For news, updates and screenings go to: higherlovefilm.com

About the filmmaker – Hasan Oswald, Director / Producer / Cinematographer entered the film world only four years ago. In that short period of time Hasan Oswald has quickly established a unique ability to capture the human experience through verité cinema. His unfettered access to and intimacy with his characters creates a seamless veneer between the filmmaker and subject. In making HIGHER LOVE Oswald used a Robert Rodriguez inspired zero-budget strategy to make the film, selling his blood-plasma, racking up no interest credit card bills, and learning all things films on youtube tutorials in lieu of film school.His work first caught the eye of award-winning filmmakers Nick Quested & Sebastian Junger (Restrepo) and he started his professional career as a cameraman for National Geographic’s film Hell on Earth: The Fall of Syria and the Rise of ISIS. He has since covered the water crisis in Flint, Michigan, drug trafficking and homelessness in Philadelphia. His current project focuses on the Yazidi Genocide in Iraq. Higher Love is his documentary feature directorial debut.

“Most stories need a point of view and with that point of view comes a set of morals and beliefs that angle the focus. For a documentary – or any film for that matter – to expel bias, there must be a highly nuanced approach that allows all views, in equal measure, in one space. Hasan Oswald’s HIGHER LOVE achieves just that.” – Take One Cinema

“Americans exist in this condition. Big Pharma aggressively markets addictive, profitable pain meds, and these ubiquitous drugs have seeped down into abandoned places and people. That these people are invisible and unknown is disgusting beyond the pale. Hasan Oswald shows us this life in Higher Love and calls us to action.” – Film Threat

“It is one of the best films of 2020 so far. This may have been the first truly great film I saw for Slamdance. It is a film that haunted me for days after I saw it. It is a tough tough film about what drugs are doing to society.”  – Unseen Films

“What is most interesting about Oswald’s docu-style feature is the way in which horror manifests through the real-life monster of drug addiction and poverty.” – Horror Buzz