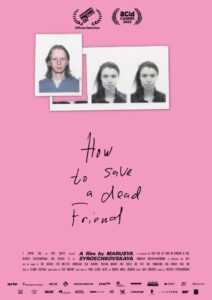 story of Marusya Syroechkovskaya, a suicidal 16-year-old as she falls in love with a humorous grunge kid named Kimi Morev. Fueled by drugs and music, the inseparable couple films the euphoria, anxiety and misery of their precarious existence under the shadow of their oppressive government. In the “depression Federation” (Russia), governed by leaders keen to bring forth an authoritarian dream, millennial suicides have become omnipresent – a last act of self-will among a generation denied the

chance to envision a better future. Their  unbreakable love story takes hold in this destructive world, and Marusya uses her camera to chronicle it all – from the rise of hope as she and Kimi get married and begin their lives together, to the ever-increasing threat from their country’s internal

weapons of isolation and division. Captured over 12 years, this raw, exuberant, and moving love story, provides insight into a silenced generation of rebellious youths struggling to survive in Putin’s Russia. Marusya’s camera now becomes her last chance to save something of the fragile Kimi. Director Marusya Syroechkovaya HOW TO SAVE A DEAD FRIEND speaks the language of a disenfranchised, silenced generation fluently, as it “saves” one voice from being lost forever.

For more go to: howtosaveadeadfriend.com

About the filmmaker – Director / Producer  Marusya Syroechkovskaya  is a Moscow-born award-winning filmmaker and visual artist, who had to flee Russia as the March 2022 crackdown on opposition voices increased. Marusya studied filmmaking at the School for Documentary Film in Moscow under professor Marina Razbezhkina and received her MA in Film Directing at the Institute of Contemporary Art in Moscow (graduated with honors). Her student short, Exploration of Confinement received a Jury Award at the New Orleans Film Festival 2013 and qualified for the 2013 Academy Awards. It was also selected for the 35th Moscow International Film Festival, the Message to Man International Film Festival 2013, Tenerife Shorts Film Festival 2014, and a number of other international film festivals. Her training includes workshops such as Ex Oriente Film, Flahertiana, and IDFAcademy. Marusya is a 2015 Nipkow Program Fellow (Berlin, Germany).

“For anyone currently wondering about the condition of nonconformist youth in Russia, Marusya Syroechkovskaya’s How To Save A Dead Friend makes a fascinating watch – although the picture it presents is more than a little desolate.” – Jonathan Romney, Screen International

“How to Save a Dead Friend is a feat of a film that contains so much personal truth in the quotidian images of an intimate video journal, that it hits the bull’s eye in capturing the most startling understanding of a generation…” – Luis Vélez, Cinencuentro

“At once deeply personal and socially relevant, How to Save a Dead Friend is a powerful statement.” – Shane Slater, Awards Radar