I’LL BE GONE IN THE DARK, a six-part documentary series currently airing on 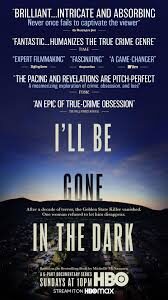 HBO with new episodes premiering on Sunday nights at 10:00 p.m.

I’LL BE GONE IN THE DARK, is based on the book of the same name and explores writer Michelle McNamara’s investigation into the dark world of a violent predator she dubbed the Golden State Killer. Terrorizing California in the 1970s and ‘80s, the Golden State Killer is responsible for 50 home-invasion rapes and 12 murders. This series gives voice to the survivors and their families, documenting an era when sex crimes were often dismissed or hidden in shame. A timely inquiry into our macabre preoccupation with true crime and a cautionary tale of the dangerous lure of addiction, the

series is a riveting meditation on obsession and loss, chronicling the unrelenting  path of a mysterious killer and the fierce determination of one woman to bring the case to light. Michelle McNamara lived a quiet life as a writer, mother and wife, preferring to stay on the periphery of the Hollywood world of her comedian

husband Patton Oswalt. But every night, as her family slept, she indulged her obsession with unsolved cases. Delving into the world of online chat rooms and crime blogs, she became immersed in the graphic details of the Golden State Killer, (aka EAR, Original Night Stalker),  case, along the way connecting with like-minded sleuths, trading facts, photos and leads. I’LL BE GONE IN THE DARK co-producer and co-director Elizabeth Wolff joins us to talk about her collaboration with series director Liz Garbus and her team as they pieced together the detective story within the detective story, emerging with a sprawling story of survival, obsession, pathology, community and heart-breaking loss.

The series is directed by Academy Award nominee and Emmy® winning director Liz Garbus (HBO’s “Who Killed Garrett Phillips,” “Nothing Left Unsaid: Gloria Vanderbilt & Anderson Cooper”) and produced by Story Syndicate. Additional directors on the series include Elizabeth Wolff, Myles Kane and Josh Koury. I’LL BE GONE IN THE DARK will also be available on HBO On Demand, HBO NOW, HBO GO and partners’ streaming platforms.

“I’ll Be Gone in the Dark” is more than a true crime documentary, although it succeeds in a terrifyingly brilliant way.” – Kristen Lopez, indieWire

“Just shattering, this true-life story.” – Anne Brodie, What She Said

“This core of respect for shared humanity differentiates Garbus’ as well as McNamara’s tellings from so much true crime storytelling, and justifies weaving the personal into the procedural.” – Judy Berman, TIME Magazine