Why are healthcare costs so high in the United States? Filmmaker Sandra 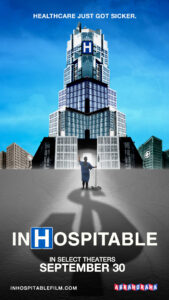 Alvarez’s  illuminating documentary INHOSPITABLE follows patients and activists as they band together in an effort to stop UPMC, a multi-billion-dollar nonprofit hospital system, from making vital care unaffordable for hundreds of thousands of vulnerable patients in western Pennsylvania. Few are aware that in the past several years many nonprofit hospitals around the country have been building healthcare empires and amassing huge amounts of wealth and political power at the expense of the surrounding residents. The story of INHOSPITABLE illustrates this alarming

trend and turns the lens on the seemingly un-winnable battle between the Goliath UPMC and the patients, hospital workers, community activists, labor leaders, journalists, and politicians – almost all of them women – who built a grassroots movement to literally fight for their lives. Director Sandra Alvarez (The History of Comedy, The Nineties) explores the perspectives of patients, hospital workers, advocates, and politicians to shed light on an overlooked fight for justice and how what happened in Pennsylvania can and is happening in every corner of America.

For updates and screenings go to: inhospitablefilm.com

To watch go to: inhospitablefilm.com

About the filmmaker – Director and Producer Sandra Alvarez has spent her career directing and producing a wide spectrum of documentary and television programs appearing on CNN, Netflix, Sundance Channel, History Channel, BBC America, A&E Network and Discovery Channel. Her previous work includes serving as one of the directors of the Netflix original documentary series HOT GIRLS WANTED: TURNED ON, which premiered at the Sundance Film Festival in 2017. She served as a producer for CNN’s documentary series THE NINETIES and THE HISTORY OF COMEDY.