Unapologetically honest, IT’S NOT A BURDEN: The Humor and Heartache 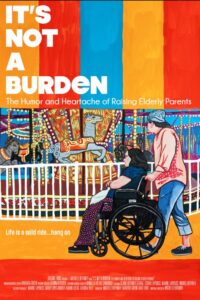 of Raising Elderly Parents provides an intimate look at the multi-layered and endlessly-complex relationships between aging parents and the adult children who care for them. Emmy® nominated filmmaker Michelle Boyaner shares her very personal journey caring for her long-divorced aging parents (her larger-than-life Mother battling dementia, her Father, a hoarder) as well as weaving in a variety of other families supporting stories, including several “When Harry Met Sally” couch-style interviews. Packed with archival and vérité footage, the  families of IT’S NOT A BURDEN open

their homes and their hearts, sharing stories of the universal issues we face around the topic of caring for our aging parents and reminding us we are not alone. IT’S NOT A BURDEN not only

explores the frustrations and fears, but also the transformative bonds that happen when familial roles are reversed, friends support friends and communities come together, exemplifying our capacity to love. Emmy®-nominated director, writer and producer Michelle Boyaner (Packed in a Trunk: The Lost Art of Edith Lake Wilkinson) and Producer Katie Ford (Miss Congeniality) join us for a conversation on the many challenges as well as the enriching rewards of caring for your loved ones.

For news and updates go to: itsnotaburden.com

Find out more about caring for loved ones at: itsnotaburden.com/resources

It’s Not a Burden will be distributed by Gravitas Ventures (North American), a Red Arrow Studios Company and will be released on VOD in the US on June 1, 2021 on several platforms.

About the filmmaker – Michelle Boyaner – Writer / Director / Producer is an award-winning, Emmy® nominated filmmaker whose projects have included the recent HBO Documentary film Packed in a Trunk: The Lost Art of Edith Lake Wilkinson, as well as the documentary feature, and festival favorite, A Finished Life: The Goodbye & No Regrets Tour. Documentary shorts include Hi, You’ve Reached Dave’s Apartment, and Tina Paulina: Living on Hope Street, as well as the narrative shorts, You’re Still Young, and The Bedwetter. Prior to her film work, Michelle wrote Oh, for God’s Sake Whisper It, a book of personal essays chronicling her beloved Grandmother’s battle with Alzheimer’s.  She is currently also at work on a scripted web series about growing up in the 1970’s in a Southern California suburb.

About the filmmaker – Katie Ford – Producer – is best known for writing the hit film, Miss Congeniality.  She is currently co-creator of High Desert,  a new series for Apple TV starring Patricia Arquette and produced by Ben Stiller’s Red Hour Productions. Katie has written successfully for both comedy and drama with credits as diverse as the Golden Globe and Emmy-Nominated movie Prayers For Bobby, ABC’s Desperate Housewives,  Wonderful World of Disney’s critically acclaimed,  Little House on the Prairie mini-series, and TNT’s Transporter series. She got her start at age 21 writing for NBC’s Family Ties. Ford splits her time between writing for TV and Film, and creating new types of storytelling through digital media formats. She has been a guest teacher and lecturer at many Universites and independent classes – working with up-and-coming writers.