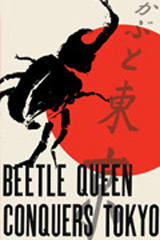 BEETLE QUEEN CONQUERS TOKYO is a documentary that delves into the ineffable mystery of Japan’s age-old love affair with insects. A labyrinthine meditation on nature, beauty, philosophy and Japanese culture that might just make you question if your ‘instinctive’ repulsion to bugs is merely a trick of western conditioning.  Sold live in vending machines and department stores, plastic replicas included as prizes in the equivalent of a McDonald’s Happy Meal and the subject of the No. 1 videogame, MushiKing, from the smallest backyard to the top of Mt. Fuji, insects inspire an enthusiasm in Japan seen nowhere else in this world. Beetle Queen Conquers Tokyo discovers why Japan developed this rich and enriching social relationship with insects.  Like a detective story, the film untangles the web of influences behind Japan’s captivation with insects. It opens in modern-day Tokyo where a single beetle recently sold for $90,000 then slips back to the early 1800s, to the first cricket-selling business and the development of haiku

and other forms of insect literature and art. Through history and adventure, Beetle Queen Conquers Tokyo travels all the way back in time to stories of the fabled first emperor who named Japan the “Isle of the Dragonflies.” Along the way the film takes side trips to Zen temples and Buddhist Shrines, nature preserves and art museums in its quest for the inspirations that moved Japan into this fascination while other cultures hurtled off towards an almost universal and profound fear of insects. Interspersed with the philosophies of one of Japan’s best-selling authors and anatomists, Dr. Takeshi Yoro, and laced with poetry and art from Japan’s history, this film becomes about much more than insects. Beetle Queen Conquers Tokyo is set to the rhythm of traditional Japanese values in its attention to detail, harmony, and the appreciation of the seemingly mundane. It quietly challenges the viewer to observe the world from an uncommon perspective that will shift the familiar to the fantastic and just might change not only the way we think about bugs, but the way we think about life. Director Jessica Oreck joins us to talk about her debut documentary and her intriguing journey from entomologist to filmmaker.

For news and updates go to: beetlequeen.com/home

“Oreck gives us some marvelous close-ups of scampering beetles and butterflies emerging from their pupae, but the focus here is primarily on people.” – Peter Rainer, Christian Science Monitor

“A scientist looking for a combination of childlike innocence and minimalist sophistication might not see it in Hello Kitty but can recognize it in a horned beetle.” – Mike Hale, New York Times

“Zen gardens, banzai trees, the art of haiku — indeed, the whole of Japanese minimalism becomes a setting for these multilegged scramblers, imbued with Shintoist wisdom for those who would look and listen.” – Joshua Rothkopf, Time Out

“An expansive take on the world in miniature, Jessica Oreck’s documentary debut pursues all angles on a novel subject — the Japanese obsession with insects — until it assumes a worldview.” – Eric Hynes, Village Voice