Joseph Pulitzer’s New York newspaper, The World, would transform American media and make him wealthy, admired and feared. Throughout his four decades 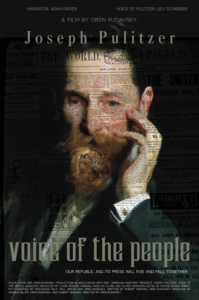 as a reporter and publisher, he created a powerful artistic vehicle that spoke to an unprecedented number of readers. Towards the end of his life, both sickly and blind, Pulitzer’s commitment to fearless reporting would tested by the most powerful person in American life. Pulitzer is an American icon who spoke of “fake news” over one hundred years ago. He fought the dangers that the suppression of news had for a democracy long before our present threats to press freedom. While he is remembered for the prizes that bear his name, his own heroic battles in the face of grave illness and Presidential ire have been forgotten as has the artistry and game changing originality he brought to newspapers. How did Joseph Pulitzer, once a penniless young Jewish immigrant from Hungary, come to challenge a popular president and fight for freedom of the press as essential to our democracy? Adam Driver narrates the film. Liev Schreiber is the voice of Pulitzer. Tim Blake Nelson is the voice of Teddy Roosevelt and Rachel 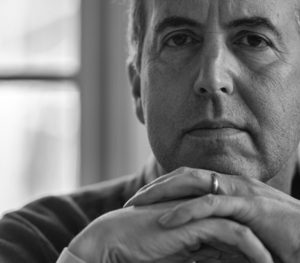 Brosnahan is the voice of Nelly Bly. Joseph Pulitzer: Voice of the People Director and Producer Oren Rudavsky is the recipient of a Guggenheim Fellowship, and several National Endowment for the Humanities and National Endowment for the Arts grants. Rudavsky produced Witness Theater a film chronicling a Self help organized workshop between holocaust survivors and high-school students which will premiere in 2019. His previous films Colliding Dreams co-directed with Joseph Dorman, and The Ruins of Lifta co-directed with Menachem Daum, were released theatrically in 2016. Colliding Dreams was broadcast on PBS in May 2018.  Director Oren Rudavsky joins us for a conversation on the indispensable role Joseph Pulitzer played in the development of America’s crown jewel, freedom of the press.

For news and updates go to: Josephpulitzerfilm.com

“Summarizing the great strides he made for journalism without ignoring his colorful flaws, Oren Rudavsky’s Joseph Pulitzer: Voice of the People is an excellent primer, not just on the man but on the birth of the modern newspaper.” – John DeFore, Hollywood Reporter

“Joseph Pulitzer: Voice of the People serves as a profile of the publishing giant and an important lesson on freedom of the press.” – Danielle Solzman, Solzy at the Movies

“Newspapers have been going downhill ever since the days of “yellow journalism” but this film about one of its masters demonstrates that documentaries are better than ever.” – Louis Proyect, Counterpunch.org