For the past 25 years acclaimed photographer and filmmaker Lauren Greenfield has travelled the world, documenting with ethnographic 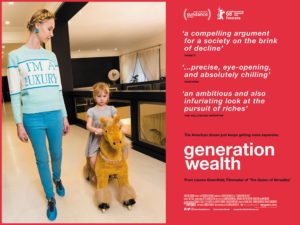 precision and an artist’s sensitivity a vast range of cultural movements and moments. Yet, after so much seeking and searching, she realized that much of her work pointed at one uniting phenomenon: wealth culture. With her new film, Generation Wealth, she puts the pieces of her life’s work together for in an incendiary investigation into the pathologies that have created the richest society the world has ever seen. Spanning consumerism, beauty, gender, body commodification, aging and more, Greenfield has created a comprehensive cautionary tale about a culture heading straight for the cliff’s edge. Generation Wealth, simultaneously a deeply personal journey, rigorous historical essay, and raucously entertaining expose, bears witness to the global boom-bust economy, the corrupted American Dream

and the human costs of capitalism, narcissism and greed. Emmy-award-winning photographer / filmmaker, Lauren Greenfield’s expansive artistry includes her monographs (Girl Culture, Fast Forward, THIN, Generation Wealth), and documentaries (THIN, kids+money, The Queen of Versailles). The Queen of Versailles won her the 2012 Best Documentary Director Award at Sundance Film Festival. Director Lauren Greenfield joins us to talk about her sweeping film and the damning indictment of a profligate world of depraved indifference, hell-bent on stockpiling pointless possessions.

For news and updates go to: generation-wealth.com

“Through her dedication to other people’s lives, and with such open-book storytelling of her own, Greenfield is able to make a stunningly deeply resonant documentary about notions as seemingly obvious as the value of love over wealth itself.” – Nick Allen, RogerEbert.com

“Greenfield makes a compelling argument for a society on the brink of precipitous decline, choosing to interpret the runaway vanity and rampant materialism observed in her own work as harbingers of our imminent destruction.” – Peter DeBruge, Variety

“This personal approach gives the film a sharp intimacy, and from here Greenfield pulls out to reveal how similar patterns are reshaping lives and families the world over.” – Nikki Baughan, Screen International