Born and raised in East London’s working-class Stratford neighborhood, nothing in the background of Lee Alexander McQueen hinted at his future. The youngest of six children, Lee  might have been expected to become a 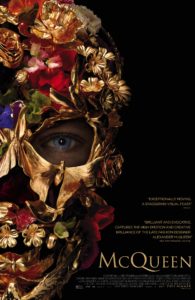 plumber, a bricklayer or perhaps a cab driver like his  father. Instead, McQueen’s fierce romanticism and punk poetry helped create 1990s-era “Cool  Britannia,” a celebration of youth culture in the U.K. For perhaps the first time since the  Swinging Sixties, a lad from the East End of London could — and  did — become one of the most  original and influential artists of his time. Filmmakers Ian Bonhôte and Peter Ettedgui capture the life and work of a unique creative talent in all his glorious anarchy in their new film, McQueen. They offer a thrilling portrait of McQueen’s life and complex persona, following him as he conquers the world of fashion with designs as ravishing as they are sinister. From his apprenticeship at an old-school Savile Row tailor and haberdasher, where he displayed a

preternatural knack for pattern cutting and tailoring, to his death at only 40, the film breaks the rules of documentary storytelling with its mosaic of standalone fragments shot in different  styles, which accumulate and combine to create a groundbreaking, multi-faceted portrait. Through exclusive interviews with his closest friends and family, recovered archives, exquisite visuals and music, McQUEEN is an authentic celebration and thrilling portrait of an inspired yet tortured fashion visionary. Co-director and writer Peter Ettedgui (co-director Ian Bonhote) talks about the making of a personal and intimate look into the  extraordinary life career and artistry of one of the most influential fashion designers of our time.

For news and updates go to: bleeckerstreetmedia.com/mcqueen

“The intricacy of the pieces and stagings… makes McQueen the relatively rare documentary that demands to be seen on the big screen.” – Inkoo  Kang, Slate

“In the crowded field of fashion docs, this one stands tall.” – David Rooney, Hollywood Reporter

“This intelligent, honest documentary explores McQueen’s complex personality without getting tacky or tabloidy, or ignoring his dark side.” – Cath Clarke, Time Out

“There’s so much fresh air in this stunningly good biography that it feels like you’ve never encountered a rags-to-riches, tortured-artist story before. Not just for fashion lovers.” – MaryAnn Johanson, Flick Filosopher