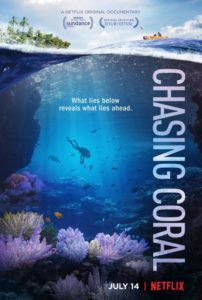 Coral reefs are the nursery for all life in the oceans, a remarkable ecosystem that sustains us. Yet with carbon emissions warming the seas, a phenomenon called “coral bleaching”—a sign of mass coral death—has been accelerating around the world, and the public has no idea of the scale or implication of the catastrophe silently raging underwater. Chasing Coral taps into the collective will and wisdom of an ad man, a self-proclaimed coral nerd, top-notch camera designers, and renowned marine biologists as they invent the first time-lapse camera to record bleaching events as they happen. Unfortunately, the effort is anything but simple, and the team doggedly battles technical malfunctions and the force of nature in pursuit of their golden fleece: documenting the indisputable and tragic transformation below the waves. With its breathtaking photography, nail-biting suspense, and startling emotion, Chasing Coral is a dramatic revelation that won’t have audiences sitting idle for long. Director Jeff Orlowski (Chasing Ice) joins us for a lively and hopeful discussion on what is happening to mother ocean and how we can avoid the catastrophic consequences of a world without coral reefs.

For news and updates go to: chasingcoral.com

“The beauty of Chasing Coral is matched only by its urgency, as director Jeff Orlowski encapsulates the issue of global climate change by showing where it’s doing real, measurable damage in real time: The world’s coral reefs.” – Sean P. Means

“The film is a devastating success, moving in its beauty and wrenching when that beauty withers.” – Alan Scherstuhl, Village Voice

“The urgency of this problem requires people to become informed about the issues, starting with seeing the film either at the IFC or on Netflix.” – Louis Proyect, rec.arts.movies