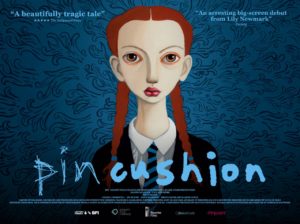 for their new life in a new town. Determined to make a success of things after a tricky start, Iona becomes ‘best friends’ with Keely, Stacey and Chelsea. Used to being Iona’s bestie herself, Lyn feels left out. So Lyn also makes friends with Belinda, her neighbor. As much as Lyn and Iona pretend to each

other that things are going great, things aren’t going great for either of them. Iona struggles with the girls, who act more like frenemies than friends, and Belinda won’t give Lyn her stepladders back. Both Mother and Daughter retreat into fantasy and lies. Anchored by two remarkable performances by the film’s leads, Joanna Scanlon (Lyn) and Lily Newmark (Iona) writer / director Deborah Haywood feature film debut confidently delivers a lacerating take on bullying, cruelty and mental illness.

For news and updates go to: pincushionfilm.co.uk

“Pin Cushion is most emotionally piercing in depicting the daily ways in which the world still punishes this loving, mild-as-milk woman for her difference.” – Guy Lodge, Variety

“Writer-director Deborah Haywood makes her feature directorial debut with the surreal and whimsical mother-daughter nightmare Pin Cushion, driven by a singular vision and masterful control of a unique tone, which tiptoes the line of beauty and terror.” – Katie Walsh, Los Angeles Times

“The film is like a cross between a crocheted bunny and a nail bomb.” – Wendy Ide, Observer