In the deserted hills of an Indonesian island, Marlina, a young widow, is attacked and robbed of all her livestock by a gang of seven bandits. She then defends 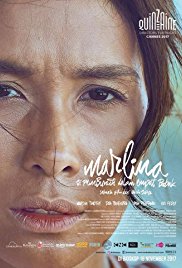 herself, setting out on a journey to find justice, empowerment, retribution and redemption. But the road is long, especially when she begins to be haunted by the ghost of her victim. A stunning ‘Scope western set to a Morricone-inspired score, this unique tale of female cinematic revenge takes no prisoners.  Marlina the Murderer in Four Acts, was directed by Indonesian-born Mouly Surya.  This feminist revenge tale had its world premiere at Cannes’ Directors’ Fortnight. It opens nationwide, including Los Angeles at the

Laemmle’s Monica Film Center on July 6, 2018. Mouly Surya is considered one of Indonesia’s most gifted filmmakers, Surya premiered her award-winning debut, Fiksi, at the Busan International FIlm Festival. Her second feature What They Don’t Talk About When They Talk About Love had its world premiere at Sundance and went on to many festivals including Karlovy Vary and Rotterdam, where it received the NETPAC Award. In addition to making films, she also teaches directing. Marlina the Murderer in Four Acts, is her third film. Mouly Surya joins us to talk about her elegant allegory on revenge, justice and self-determination.

For news and updates go to: kimstim.com/marlina

“[Marlina] is, like so many classic gunslingers, a killer by circumstance, a desperado with an honorable cause.” – CinemaScope

“The feminist satay Western you need to see; satisfyingly deadpan, viciously vengeful and full of surprises. One of the most ravishingly beautiful films at Cannes.” – The Irish Times
“Going to be loved by arthouse audiences.” – Film Inquiry