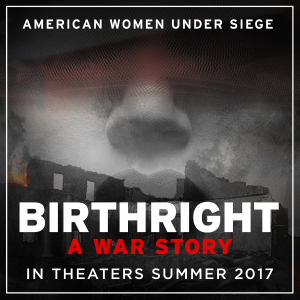 BIRTHRIGHT: A WAR STORY is a feature length documentary that examines how women are being jailed, physically violated and even put at risk of dying as a radical movement tightens its grip across America. The film tells the story of women who have become collateral damage in the aggressive campaign to take control of reproductive health care and to allow states, courts and religious doctrine to govern whether, when and how women will bear children. The documentary explores the accelerating gains of the crusade to control pregnant women and the fallout that is creating a public health crisis, turning pregnant women into criminals and challenging the constitutional protections of every woman in America. This is the real-life “Handmaid’s Tale.” Director Civia Tamarkin and Producer Luchina Fisher talk about an insidious, pernicious campaign to undermine and ultimately deny women’s control over their own body.

For news and updates go to: birthrightfilm.com

“Birthright is a stark look at how far the rights of half the US population have been eroded, and it should make anybody — no matter their feelings about abortion — sit up and take notice.” – Jennie Kermode, Eye for Film

“… this film is important especially for people, like one group of interviewed high schoolers, who think that Roe v. Wade was something “learned some time ago” with no application to their own lives.” Harvey Karen, Compuserve

“A necessary, if not always well-constructed, examination of the perilous state of reproductive rights in the United States.” – Maria Garcia, Film Journal International

“The case histories are stacked to support the film’s point of view, but that doesn’t make them less painful.” – Helen Verongos, New York Times

“The film’s real strength, however, is revealed a bit late, in a series of stark portraits of women who have faced prosecution as they sought to take care of themselves.” – Daphne Howland, Village Voice