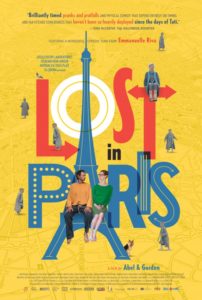 Filmed in Dominique Abel and Fiona Gordon’s signature whimsical style, LOST IN PARIS stars the filmmakers as a small-town Canadian librarian and a strangely seductive, oddly egotistical vagabond. When Fiona’s (Gordon) orderly life is disrupted by a letter of distress from her 88-year-old Aunt Martha (delightfully portrayed by Oscar nominee Emmanuelle Riva) who is living in Paris, Fiona hops on the first plane she can and arrives only to discover that Martha has disappeared. In an avalanche of spectacular disasters, she encounters Dom (Abel), the affable, but annoying tramp who just won’t leave her alone. Replete with the amazing antics and intricately choreographed slapstick that has come to define Abel and Gordon’s work, LOST IN PARIS is a wondrously fun and hectic tale of peculiar people finding love while lost in the City of Lights. Co-directors Dominique Abel and Fiona Gordon join us to talk about their warmhearted, funny and embracing ode to love.

For news and updates go to: lostinparis.oscilloscope.net

“Gordon and Abel incorporate elements of lighthearted musicals and silent-film comedy (a scene atop the Eiffel Tower evokes the derring-do of Harold Lloyd) and provide themselves plenty of opportunities to stretch their pliant, wiry physicality.” – Serena Donadoni, Village Voice

“An exquisite miniature puzzle-box pop-up-book of a movie. All is color and light and exhilaration here, a fantastical lark that is sheer mischievous joy.” – MaryAnn Johanson, Flick Philospher

“Cruel comic mishaps may be this movie’s raison d’être, but they are softened at every turn by the gentle humanity of the city’s inhabitants, and by the unspoken sense that everything will turn out fine in the end.” – Justin Chang, Los Angeles Times

“Rather than reinventing the wheel, Abel and Gordon keep turning it with their own intimate touch.” – Eric Kohn, IndieWire