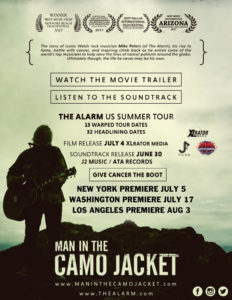 MAN IN THE CAMO JACKET is the story of iconic musician Mike Peters of the Welsh rock band The Alarm. The film traces his rise to fame, battles with cancer, and inspiring climb back as he enlists some of the world’s top musicians to help save the lives of cancer patients around the globe. Ultimately though, the life he saves may be his own. Filmed over the course of eight years, the film documents Mike’s journeys to the summits of the world’s tallest mountains and to the depths of his regular chemotherapy treatments and features one-of-a-kind performances from legendary rock musicians. MAN IN THE CAMO JACKET won Best Music Documentary at the 2017 Arizona International Film Festival and the Audience Award for Best Music at the 2017 Newport Beach Film Festival. Mike Peters was honored with the Humanitarian Award at the 2017 American Documentary Film Festival. MAN IN THE CAMO JACKET features Mike Peters of The Alarm, Slim Jim Phantom of Stray Cats, Duff McKagan of Guns N’ Roses, Billy Bragg, Glenn Tilbrook of Squeeze, Billy Corgan of The Smashing Pumpkins, Richard Blade, Martha Quinn. Director Russ Kendall joins us to talk about his rousing, life-affirming new film.

For news and updates go to: maninthecamojacket.com