NOSSA CHAPE tracks the rebuilding of the Chapecoense football club in Brazil after a November 28, 2016 airplane crash left only three players alive. Through 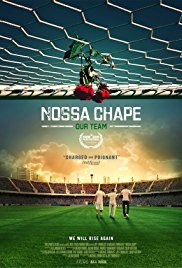 exclusive access to the families of the deceased, the new team and three severely injured recovering players, the documentary investigates the community’s many challenges in the aftermath of tragedy. The town finds itself divided by a desire to respect the memory of those they lost while also preparing to move the club into its future. The citizens and team must find a way to unite around a

common identity. From fairytale to tragedy to triumph once more. The unique story of Chapecoense — a football club from a remote Brazilian city that miraculously qualifies for the final of the Copa Sudamericana, only to face destruction when the plane flying them to the game crashes, killing the entire team except for three players. How will those who remain alive handle the tragedy? Co-director Michael Zimbalist (Two Escobars) joins us to talk about the tragedy and the resurrection of a city, team and three Nossa Chape players’ incredible story.

For news and updates go to: foxsports.com

“From finger pointing to shared sadness, and moments of unexpected communion and joy, Nossa Chape is most engrossing when it pulls back from individual players, and takes in the whole stadium.” – Richard Whittaker, Austin Chronicle

“Nossa Chape has an urgency and poignancy that several narrative dramas only wish they could achieve.” – Bobby LePire, Film Threat