With a title taken from the New Testament, Strangers on the Earth follows the extraordinary, almost foolishly ambitious mission of Cleveland Orchestra cellist Dane 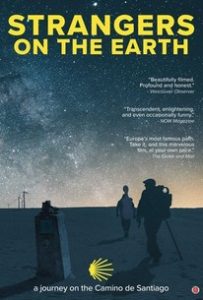 Johansen to traverse the storied paths of Europe’s famed pilgrimage trail, the Camino de Santiago. Johansen’s singular quest to walk the 600-mile trail carrying his cello on his back sets him apart from most other pilgrims. His goal: to perform and record Bach’s Cello Suites in 36 ancient churches along the way. As has likely occurred on every Camino pilgrimage since the Middle Ages, Johansen encounters a diverse array of characters: lovers whose entire relationship plays out in a matter of a few weeks; self-styled philosophers; wounded souls recovering from

illness or mourning the loss of loved ones. All share the trials and tribulations of the journey along with their personal stories over goat-skins of wine. An experiential piece of filmmaking, Strangers on the Earth brings to audiences a musical artist’s personal journey set against a universal backdrop. The film reveals the shared experience of the pilgrims who walk the Camino, finding common patterns in both the multitude of bodies who move westward on the path each year (the physical) and the inner life of these same individuals who are often surrounded by other pilgrims – but are very much alone. We are joined by director Tristan Cook to talk about his thoughtful take on recognizing the importance of beauty, dreams, spirituality, art, music and humanity,

For news and updates go to: sotefilm.com

“Opens a window onto a famous Catholic pilgrimage…giving some sense of the profundity of the experience.”  – The New York Times

“A soulful riff on the all-too-fleeting rhapsodies of travel. Beauty-dazed and rapt with a kind of giddy sadness.”  – Film Journal

“Europe’s most famous path. Take it, and this marvelous film, at your own pace.” – The Globe and Mail

“Ironically if you’re walking 700 km or 700 miles with other people, you cannot expect them to be strangers on the earth. An engaging doc about the centuries’ old pilgrimage to Santiago de Compostela” – Harvey S. Karten, Big Apple Reviews