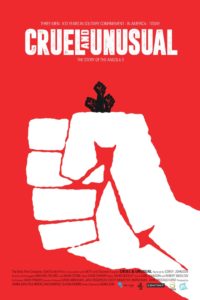 The story of three men who have spent longer in solitary confinement than any other prisoners in the US because of the murder of a prison guard in 1972 at Angola, the Louisiana state penitentiary. Robert King, Herman Wallace and Albert Woodfox were convicted by bribed and blind eye witnesses and with no physical evidence. Targeted as members of the Black Panther party the film follows their struggle against the miscarriage of justice and their cruel and unusual treatment. Known as the ‘Angola 3’, their story culminated in 2016 with the release of Albert Woodfox after 43 years in solitary confinement. ‘Cruel and Unusual’ has been eight years in the making. But that pales into insignificance compared to the 43 years that Albert Woodfox spent in a 6 foot by 9 foot cell for a crime he did not commit. After years left forgotten in the depths of America’s bloodiest prison, their struggle against this injustice had become an international scandal; when on the 19th February last year, on his 69th birthday, Albert was finally released, it was headline news around the world. On any given day it is estimated that ten to fifteen thousand prisoners are kept in solitary in the US. Director Vadim Jean joins us in a conversation about the incredibly heartbreaking and infuriating saga of the three men subjected to unspeakable brutality.

For news and updates go to: Cruel and Unusual film