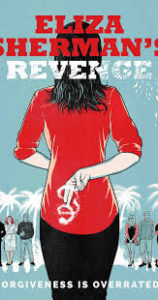 Ten years ago, Eliza Sherman was humiliated by people she thought were her friends. Now, after an unorthodox encounter, she finds herself newly endowed with special powers.  So she decides to lure her old nemeses to a house in the Hollywood Hills under the guise of a birthday party for ’80s heartthrob Richard Grieco. By spiking the salsa, she brings about a drug induced slumber party — trapping everyone in the house with a good, old-fashioned forcefield.  Battle lines are drawn, and relationships are put to the test. Eliza’s plans to punish her houseguests repeatedly go awry as her powers prove to be no match for fate.  She must conquer her ego and stop screwing up the space-time continuum if she wants to find peace, and ultimately win the heart of her one true love. It’s twenty-four hours of mayhem, marijuana, Mexican food, and (almost) murder in this pitch-black, supernatural revenge comedy. Forgiveness is overrated. Director Gregory Fitzsimmons joins us to talk about his  quirky, off-kilter time-warped comedy.

For news and updates got to: elizashermansrevenge.com