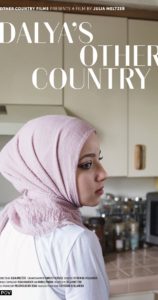 A smiling, effervescent teenager, Dalya is the focus of the new documentary Dalya’s Other Country, which tells the remarkable story of a family displaced by the Syrian conflict and explores a young life caught between highly politicized identities. Dalya comes across as an ordinary Southern California teenager. She takes selfies and goes to prom. She plays sports and hangs out at the mall. She is also the only student at her Catholic high school who wears a hijab. In 2012, Dalya moved to the United States from Aleppo, Syria, as her country disintegrated in the wake of a horrific civil war. Starting in 2013, the film follows Dalya and her mother through what seems at first a typical immigration experience. They adjust to unfamiliar American ways,

even as they maintain the cultural and religious traditions that sustain them. However, they grow tense and anxious as the 2016 presidential campaign unfolds and candidate Donald Trump calls for restrictions on Muslim immigrants. Director Julia Meltzer stops by to talk about Dalya’s uniqueness and the commonality of human beings seeking acceptance and a chance to be themselves.

For news and updates go to: pbs.org/pov/dalyasothercountry