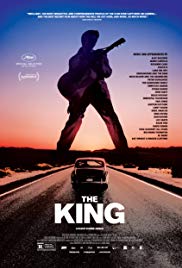 trip across America. From Memphis to New York, Las Vegas, and beyond, the journey traces the rise and fall of Elvis as a metaphor for the country he left behind. In this groundbreaking film, Jarecki paints a visionary portrait of the state of the American dream and a penetrating look at how the hell we got here. A diverse cast of Americans, both famous and not, join the journey, including Alec Baldwin, Rosanne Cash, Chuck D, Emmylou Harris, Ethan Hawke, Van

Jones, Mike Myers, and Dan Rather, among many others. To investigate these questions, THE KING traces Elvis’ rise and fall from the Deep South to New York, Las Vegas, and countless points between. Alongside this, the film examines America in parallel, from her auspicious founding to her own struggles with excess power up to the acute challenges of today. This was always Jarecki’s intent, but he could never have anticipated the election of Donald Trump, which happened in mid-production and sent a shock wave through the filmmaking process.

For news and updates go to: theking.film

“It’s hard to pinpoint exactly when Eugene Jarecki’s one-of-a-kind doc on the rise and fall of Elvis turns into a metaphor for Trump’s America, but when it happens – kapow!” – Peter Travers, Rolling Stone

“Perceptive, probing and ultimately devastating, The King is for anyone who cares about where this country has been and where it’s headed.” – Stephanie Zachary, Time Magazine

“The journey is the destination in a movie that gives you plenty to think about and argue with, as it racks up the miles and people clamber in and out of both the Rolls and the movie.” – Manohla Dargis, New York Times

“The overall merging of the two stories offers deeper insight into the fall of both the King and the country as a whole.” – Gwen Ihnat, A/V Club