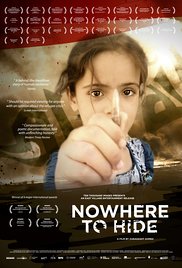 Nowhere to Hide follows male nurse Nori Sharif through five years of dramatic change, providing unique access into one of the world’s most dangerous and inaccessible areas – the “triangle of death” in central Iraq. Initially filming stories of survivors and the hope of a better future as American and Coalition troops retreat from Iraq in 2011, conflicts continue with Iraqi militias, and the population flees accompanied by most of the hospital staff. Nori is one of the few who remain. When ISIS advances on Jalawla in 2014 and takes over the city, he too must flee with his family at a moment’s notice, and turns the camera on himself. The film stretches over a period of five years, beginning with the hope of a better future, to witnessing the growth of ISIS (the Islamic State), and eventually the fall of Nori’s home town. As Nori keeps filming throughout this period of time, he begins to turn the camera on himself. Nori’s narrative represents persistence, hope and faith. But, in this new reality of being squeezed between two giant forces – ISIS on one side and the Iraqi militias on the other, is it possible to remain impartial and keep his family intact? Will he and his family survive, and be able to rebuild the country and the oasis that lies hidden behind the smoke and rubble? Director Zaradasht Ahmed talks with us about the utter devastation and fading hope of normality that now pervades his beloved country.

For news and updates go to Nowhere to Hide

“As captured through the ceaselessly unflinching lens of Sharif’s borrowed video camera, “Nowhere to Hide” offers an uneasy prognosis that is at once graphically gut-wrenching and doggedly life-affirming” – Michael Rechtshaffen, LA Times

“Some great documentaries cut through the inessentials and help you make sense of an apparently senseless world. Others … shock you into an even greater confoundment, demonstrating, moment by moment, how irrational the world really is.” – David Edelstein, New York Magazine