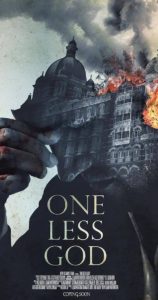 In 2008, a band of young Islamic militants from Pakistan lands in Mumbai, their primary target, the iconic Taj Mahal hotel. With Indian forces unable to regain control, for 4 days the guests must battle to survive as the terrorists seek to drive them from hiding. The harrowing events that follow will come to be known as India’s 9/11 and one of the most audacious terrorist attacks in history is captured in a horrifying and enlightening story of cruelty and sustaining humanity. One Less God Director Lliam Worthington joins us to talk about why it was important for him to shine a light on a tale of monsters and men. Director Lliam Worthington Statement: “I wanted to craft a story that walked the line between demonization and apologetics, and that would be a genuine movement towards greater humanism and compassion. One that might aspire to promote healthy discussion afterwards, as opposed to heighten fear and increase the polarization. I also wanted to capture the emotional authenticity of those who suffered in the attacks but counter that with a genuine exploration into the psyches of the terrorists. Then use those two conflicting yet parallel journeys as a means to evoke broader questions around man’s inhumanity to man and the nature of belief.”

For news and updates go to: newrealmsfilms.com.au

For details on the screening of One Less God go to: danceswithfilms.com/one-less-god