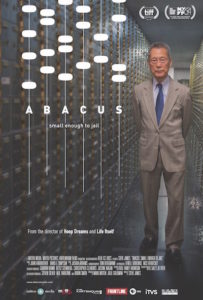 From the celebrated filmmaker Steve James (Hoop Dreams, The Interrupters, Life Itself), comes his illuminating new film, ABACUS: SMALL ENOUGH TO JAIL. The film tells the incredible saga of the Chinese immigrant Sung family, owners of Abacus Federal Savings of Chinatown, New York. Accused of mortgage fraud by Manhattan District Attorney Cyrus R. Vance, Jr., Abacus becomes the only U.S. bank to face criminal charges in the wake of the 2008 financial crisis. The indictment and subsequent trial forces Thomas Sung and his formidable daughters to defend themselves—and their bank’s legacy in the Chinatown community—over the course of a five-year legal battle. Tracking the many twists and turns of the case, Oscar-nominated James creates a moving portrait of a family, a community, and a way of life. Director Steve James joins us for a conversation on his illuminating and infuriating showcase of great documentary filmmaking.

For news and updates go to:abacusmovie.com

“[Steve James] is one of our most humanist filmmakers… [He] has an amazing ability to capture entire communities by focusing on a few people within them… The big picture doesn’t matter if we can’t see how it’s impacting people on a day to day basis.” – Brian Tallerico, Roger Ebert.com

“It’s not every day that you end up rooting for a bank, but the story “Abacus: Small Enough to Jail” tells is no ordinary tale.” – Kenneth Turan, Los Angeles Times

“In its intimate, well-observed way, the film is deeply moving… a snapshot of a loving family coming together during a crisis.” – Tim Grierson, Screen International