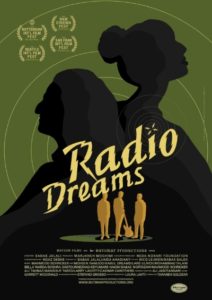 RADIO DREAMS, winner of the 45th Rotterdam International Film Festival’s Tiger Award, is the newest feature film from Iranian-British director Babak Jalali (FRONTIER BLUES). RADIO DREAMS creates the bizarre yet very real world of PARS-FM – a Farsi-language radio station broadcasting from the heart of San Francisco. The story unfolds over a single day as the station’s program manager, Hamid – a brilliant, misunderstood Iranian writer (played by the “Iranian Bob Dylan” Mohsen Namjoo) – prepares for a triumphant broadcast – a live performance pairing Metallica and Kabul Dreams, Afghanistan’s first rock band. Meanwhile, Hamid must juggle a dysfunctional mix of on-air talent, station managers, and performers while fending off the owner’s plans to wrest control of the station. RADIO DREAMS brings to life the sometimes bizarre experience of immigrants pursuing dreams in the U.S.A. with the perfect mixture of honesty, art, and socio-political topicality served up in an ingenious, offbeat transmission.

For news and updates go to: radiodreamsthemovie.com

Opens in the Los Angeles area on Friday, June 9

and at Edwards Westpark 8 (Irvine)

“There are traces of early Wim Wenders in this story of immigrants adrift in a world not their own, trying to make the best of things.” – Glenn Kenny, New York Times

“Royami is the heart of the film: It is his sincere and artistically principled dream of a musical union between East and West, between Metallica and Kabul Dreams, that fuels the film’s engine.” – Catherine Bray, Variety

“The film examines, with wit and patience, the hard work of community-building – and the toll on someone far from home, doing work that’s not his calling.” – Alan Scherstuhl, Village Voice