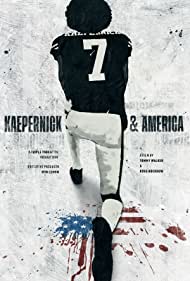 AMERICA takes us back to the summer of 2016, an election year with unrest rumbling through America. There were countless triggers – the murder videos of Philando Castille and Alton Sterling, the counterpunch of Alt-Right and Fake News, Black Lives Matter, Russian meddling – a discordant national cauldron ready to boil over. It was the birth of Trumpism, but no knew it yet. Then, Colin Kaepernick took a knee and America lost its mind. Kaep’s knee touched

down on the divide between America’s Black and white tectonic plates, creating an earthquake in the eternal race debate. The aftershocks of his singular gesture have already rippled through our country for years. Kaepernick himself answered any and all thoughtful

questions for a time, then stopped talking. And the resulting quiet has allowed for a thoughtful examination of the man and his story. It reveals layer upon layer of surprises and contradictions.  Raised in a white family, he became a Black quarterback, while in fact, he is an adopted, biracial man. Co-directors Tommy Walker and Ross Hockrow join us to talk about their deep dive into the story behind the headlines and in doing so provide us with insight into how and why this inherently shy young man became the center of attention still dealing with the scourge of racism in America.

For updates and screenings go to: tribecafilm.com/kaepernick-america

About the filmmaker – Tommy Walker is an esteemed producer and director of documentary film and television who has devoted his life to stories about race and identity. His most recent film was Toni Morrison: The Pieces I Am, an artful and intimate meditation on the legendary Nobel and Pulitzer Prize-winning author. That film earned Walker an Emmy nomination. He co-directed and produced the feature length theatrical documentary, God Grew Tired of Us, which won Best Documentary and the Audience Award at the Sundance Film Festival. He produced 13 films for The List series, including three episodes of The Black List for HBO. Other titles include Mandela in America, Tutu and Franklin – A Journey towards Peace, and With All Deliberate Speed.

About the filmmaker – Ross Hockrow is a rising star in the documentary world, bringing his myriad filmmaking skills to a range of projects.   Kaepernick & America is his latest effort, on which he is credited as director and editor.  He has contributed in those roles as well as DP on a range of documentary films including Born Strong (Netflix), Finding Giannis (TNT),  The Fieldhouse (2021 Discovery+), Valley of Sin (2020 Fox), Woman of Troy (2020 HBO), We Town (2018 SI/Amazon), Foreman (2017 Epix/NBC Universal),  An Act of Love (2016 Apple) and Pot Barons of Colorado (2014 MSNBC).   Previously, he wrote, directed and edited a long list of scripted films.