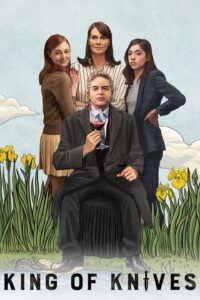 and Sadie & Kaitlin, their millennial daughters. Frank is screaming towards a mid-life crisis. Kathy pretends she’s happy and doesn’t drink that much wine. Sadie is the good child; convinced her first and only boyfriend is the one to marry. Kaitlin is the rebel, the entertainer; the truth teller who will not filter how she’s feeling. Over three days, with much drama and humor, this crap-happy family careens and skids straight towards a fateful anniversary. On the way, they realize they are more alike than they know. KING OF KNIVES, co-written by Lindsay Joy & Gene Pope and directed Jon Delgado, has earned critical acclaim from audiences who have been lucky enough to see

the film.  It has also won awards from numerous festivals including “Best Narrative Feature Film” at the Williamsburg International Film & Music Competition, “Best Feature & Lead Actress” at the Milan World Cinema Festival, and seven Platinum awards including “Winner Narrative Feature” at the International Independent Film Awards. Producer and lead actor Gene Pope joins us for a lively conversation on his own mid-life reckoning that inspired the film, his role in front of and behind the camera, what his theatre background brought to the project and working with a cast that includes Mel Harris.

For news and updates got to: kingofknivesthemovie.com

KING OF KNIVES is a Gravitas Ventures release that is available on VOD and Digital platforms including iTunes, Amazon, Apple TV, Google Play, Fandango Now and all major cable/satellite platforms on Tuesday, December 1.

“Gentle but incisive, mournful but also hopeful, and at times quite humorous, this dramedy may not leave deep cuts, but its blade shines nevertheless.” – Alex Saveliev, Film Threat

“A well told story that is helped by its strong performances. This mix of comedy and drama can be erratic at times, but the movie is an engaging watch.” – Nathaniel Muir, AIPT