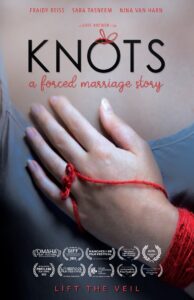 are occurring legally across the United States every day. Fraidy is an Ultra-Orthodox Jewish teen in Brooklyn when she’s coerced into marrying an abusive man. In Michigan, young Christian Nina’s father forces her to marry a man he chose. In California, Sara is fifteen when she’s kidnapped by her father and forced to marry a 28-year-old man. Each of them face an unimaginable journey. Each must find the strength to survive, and thrive. Director Kate Brewer reveals the disturbing truth about this problem in modern America through the complicated experience

of three forced marriage survivors. Nina, Sara, and Fraidy share intimate details of their personal journeys of surviving, escaping and ultimately becoming powerful voices in the historic fight to end the human rights abuse of forced marriage. Director Kate Brewer joins us to talk about modern day stories of forced marriage, violent physical and psychological abuse and the human trafficking of tens of thousands of young women throughout America and the three determined and courageous women who make up the backbone of this illuminating film.

KNOTS : A FORCED MARRIAGE STORY will be released via The Laemmle both theatrically and on their digital platform on May 7th followed by a wider digital release June 4th.

For news, screenings and updates go to: knotsthefilm.com

Get involved, go to: unchainedatlast.org

Director’s statement – How do you tell a story that isn’t yours to tell? Working with forced and child marriage survivors to share their harrowing stories – to bare their souls – this is a question I asked myself many times throughout the filmmaking process. Directing “Knots: A Forced Marriage Story” has been a deep and haunting excavation. We worked hard to expose the dark underbelly of the otherwise Pinterest-perfect concept of marriage in America. Our goal was to give survivors a platform where their voices can be heard, and their experiences felt. We wanted to let others know they are not alone. We see you. We hear you. We’ll fight for you. – Kate Brewer

“Brewer is doing a great service by revealing this source of emotional, mental and sexual abuse and explaining how this mostly legal patriarchal custom still goes on in this day and age.” – Susan Wloszczyna, AWFJ Women on Film

“The stories told are damning, deflating and compelling, the statistics alarming and the villains as obvious as your nearest “fundamentalist” this or “ultra-conservative” that.” – Roger Moore. Movie Nation

“Brewer intersperses their stories with editorial styled photo collages…distorted proportions and muted colors to illustrate the staggering imbalance in power dynamics… This isn’t a nightmare from another era, it is America today.” – Sherin Nicole. AWFJ Women on Film